Le Papillon on the Park A Family Tradition – Reinvented 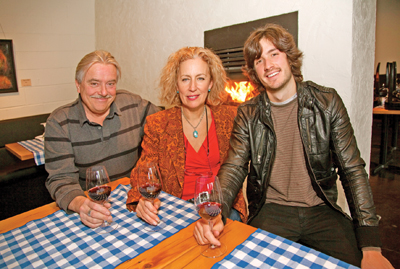 If you are familiar with the menu and atmosphere of the original Le Papillon, you can understand why they have followers from as far away as Pickering and Burlington. After a 33-year partnership, the original owners of Le Papillon in downtown Toronto parted ways two years ago.

When Danielle and Paul Bigué were searching for a new location for their restaurant, they wanted to be a part of a strong community. Fate lead them to the house on 1001 Eastern Avenue.  When they first walked through the house, they noticed that the previous owner, who was from Dorval, Quebec had left posters and artifacts – one being a sign that said “Montreal.” That and the fact that Leslieville has the largest francophone population in Toronto sealed the deal.

Danielle and Paul, recall their opening night last November, “At first, we were a little overwhelmed. There were 85 people on the first night! It wasn’t odd to find 12 to 15 people waiting at the bar in the second week after opening.”  The Beaches, Leslieville and Riverdale communities are definitely giving Le Papillon on the Park a lot of love.

When you enter the restaurant, you’d think that you are entering a trendy New York hot spot with a traditional Quebecois twist. The blue and white gingham tablecloth runners that add an homage to the past. Since they moved in, they added a second level to the house and extended the patio. Downstairs, the restaurant can comfortably seat 100 people and the patio can accommodate 136 and provides a great view of the lake.

Warm sumptuous crepes and onion soup continue to be a hit here.  In contrast, Danielle would like to bust the myth that all Quebecois food is heavy. She’s done this by creating a Spring/Summer menu that is more seasonal and incorporates some lighter meal items. The chef has also introduced a locavore friendly menu, which includes delicious organic omelletes.  Going forward, they will be using a lot of seasonal, local fresh fruits and vegetables  because  they believe it’s important to use the freshest, highest quality ingredients.

Danielle and Paul have made this a family affair with their young son Stéphane, a Business School grad. Stéphane has brought in new fresh ideas and has made it his mission to introduce the next generation of customers to the Le Papillon on the Park experience.
Recently, an episode of “Chef Worthy”, as seen on the W network, was filmed at the restaurant.  Fingers crossed, word will spread like a wildfire amongst the neighbouring film/TV types and they too will become lunchtime regulars. In the meantime, the Bigués are very excited about the future and look forward to growing with the community.

A new family just moved into the neighbourhood and they would love to have you join them for lunch, brunch and dinner!