Heat Up, Calm Down Hot Yoga at Bikram Yoga Beaches 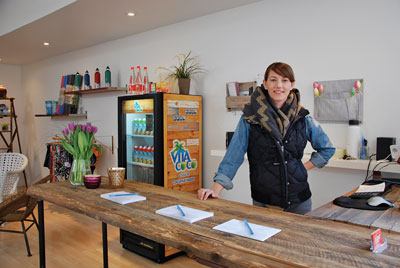 Owner and yoga instructor Dana Dineen is a true Beacher. She grew up on Kippendavie Avenue in a house where her parents still live. She remembers the building at the corner of Queen and Kippendavie that used to have a car garage off the back lane. It’s the same building where she set up her Bikram Yoga Beaches studio nine years ago.

Although open for 13 years, Dana’s been the owner for nine. The beautiful, sunny studio was recently renovated, specifically the main yoga room and lobby. Aside from its physical appearance, the business is particularly known for its welcoming environment. “I think most of the reason the studio is know for being so friendly is the people who come here,” says Dana, “It’s all a product of the kind of community we have here in the Beaches. Every day I’m so appreciative of being here.”

Dana is a strong advocate for “hot yoga”, which is offered at the studio along with a complimentary practice, Yin Yoga, which focuses on long, slow stretches.

The name “Bikram” means it is a type of “hot yoga” – a series of yoga poses done in a room where the temperature reaches around 40C. A certified Bikram teacher, Dana completed the specific training program many years and explains the many benefits of heat:

“The sweating helps with detoxification and cleansing. The heat makes it easier and safer to stretch and increases your rate of circulation, which is very good for internal organs and cardiovascular system.” It also adds an additional level of concentration and focus to the practice.

The studio’s clients are mostly drawn from the immediate community and nearby neighbourhoods. “We have some participants as young as 11 years old,” says Dana, “as well as seniors in their late 70s.”

All classes are male and female, and accommodate all levels, although the studio occasionally offers workshops for specific age groups or conditions. There are eight instructors with classes running seven days a week, all posted online. Showers on site means no one has to worry about how much they sweat. This summer, Dana plans to offer non-hot yoga camps for children, with groups for the very young (2-4 and 5-6 years-olds), and pre-teens. She also expects to introduce both 60 and 90 minutes classes.

Favourite poses? Two of the more popular and beautiful are “head to knee” and “bow-pulling”.  But all of the yoga poses are meant to work together, Dana emphasizes. “Not one is better than another – they are intended to work in combination.”

For those who have never done yoga before, Dana encourages everyone to give it a try. “The environment is very relaxed,” she says, “we can answer any of your questions, what to wear, what to expect, we are very accessible for everyone.”

While relaxing in class, you also don’t have to worry about parking. There is plenty of free parking on the side streets and a Green P lot close by.