One Woman’s Passion for Fashion Directed to “Girl Power” 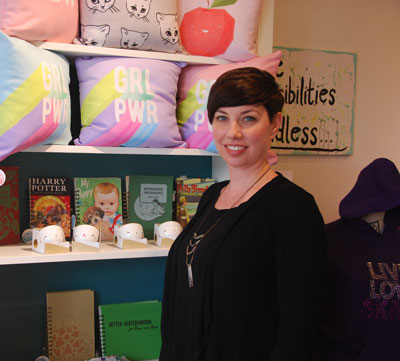 A soft purple T-Shirt reads, “The world’s first computer programmer wore a dress.” It’s not the kind of T-shirt you see everywhere. There’s another one, featuring the inspirational Helen Keller, and a third with Misty Copeland, first African American Female principal dancer with the American Ballet Theatre. These are just a few of the unique, “girl powered” items in the new east end store, Girls Are.

When Angela Loucks set the store last summer, she wanted to offer something unique and empowering, in particular for young girls 6 through ‘tweens.

“I wanted to have a store that doesn’t offer what you find at the big chains,” she explains, “I decided to source items that spoke to girls’ empowerment, and items that were positive and inspirational.”

She knew of various stores that specialized in “tween” years, but they were all for the same type of young girl. “Girls these days are very involved in sports,” says Angela, “or perhaps music, or art, or math….my store needed to include all kinds of girls.”

Angela also decided to focus on hand-made items, locally sourced clothing, and items you’d find at one-of-a-kind type of shows. For example, she carries a line of mini purses hand made by a woman in Ottawa, and “Be yourself” headbands by Sassygirl headbands. And young girls in the area coming home from Kimberley Junior Public School drop in because they love the inspirational buttons she sells.

Angela is no stranger to the retail world or the life of an entrepreneur. Both her parents have owned clothing stores and her father is a hair stylist. “It was always my dream to have my own store,” she says, “and definitely my passion is fashion.”

After graduating from the Fashion Business Program at George Brown College, Angela first worked at a Toronto spa where she gained first-hand experience sourcing and buying items for retail.

Girls Are opened at the end of the summer (it used to be home to music school Tuneology). From the beginning, it was designed to capture the spirit and individuality of every girl. Two of Angela’s main “buying” consultants are her two daughters, ages 12 and 15. Both are interested in the store and bring their specific tastes and interests. “I often ask one or the other for their opinion,” she says, “and I admit, sometimes I’m way off the mark, and they tell me so.”

Her older daughter also searches online for items and sends her mom ideas. She’s even attended the occasional show and brought back suggestions.

The store is directed at girls six years through “tweens”, although Angela says she’ll probably expand to younger years in the future.

Products for sale include T-shirts, leggings, knapsacks, jewelry, creative activities, and greeting cards. In addition, Girls Are offers various workshops, all designed to help build young girls’ confidence, inside and out. Themes have included making your own mosaic necklace, art therapy, meditation/yoga classes and writing your own song – all for young girls.

She shares the building with a children’s French bookstore and a music studio. She says it’s been great having neighbours that also focus on children.