Twin Image has Everyone Seeing Double 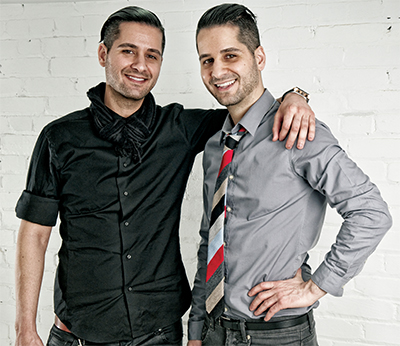 You’re not seeing double. Walk into Twin Image Hairdressing in either of the east end Toronto locations and you may do a double take. There is a hairdresser in one place and it looks like the same person over there! Most days, however, you’ll find Nick Haros at the Danforth salon and his brother Terry Haros at the new Beaches salon – twin hairdressers who own and operate Twin Image.

Twin Image has built a reputation on the quality of its work, spread by referrals from happy clients, men and women. As a result, many clients have been with them from the beginning. One lady, who moved away to California, still makes an appointment when in Toronto; another comes back to see Terry from Sweden!

Part of the secret is that only professionally trained staff work at the shops. “Every stylist who works here,” explains Nick, “does everything from colour, shampooing to style and cut.”

Terry notes, “I love to see people smile after they’ve had their hair done. Many appreciate the warm, welcoming atmosphere and make comments like, ‘All my stresses are over now!’”

The Danforth location, where Nick works, tends to be a destination shop, whereas Terry notices that a lot of people walk to the Beaches salon.

When asked about the latest hair trends, Nick talks about the return to “sexy” for women with long, natural tresses and soft blended highlights. For men, Terry points out the “Hollywood look” of the 90s with side parts, height and waves.

Hairdressing runs in the family. Their father was a hairdresser who led the trend in Toronto over a generation ago for blending together the idea of a barbershop with a hairdresser. As young boys, Terry and Nick worked around the shop, doing everything from sweeping to shampooing. Each then pursued this career, Nick was licensed by the time he was 17. After studying the profession and working in downtown salons they opened their Danforth salon in 1999.

Nick has taken extensive advanced training at the Vidal Sassoon Academy and travels to international beauty shows in New York and London. Terry, a master colourist and stylist, is known for the luxurious colour results he gets for his clients. Both brothers insist on using the highest quality of products, such as Kevin Murphy known to be sulfate and paraben free.

Although walk-ins are welcomed, you can easily book an appointment online at their website. It’s just another way that this hairdressing duo makes life simpler – and more beautiful!