A Man Made Winter Jewel at Glen Stewart Ravine 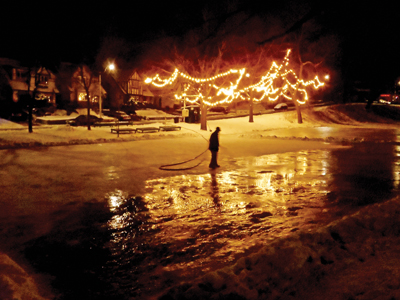 Winter in the Beaches – there’s nothing like it. If you choose to embrace the weather instead of hibernating, the season can be a wonderful chance to get active and make the most of what our community has to offer. The fact that we can enjoy a natural skating rink such as the one in the Glen Stewart ravine is largely due to a small team of volunteers whose passion gives the locals a pristine place to play. 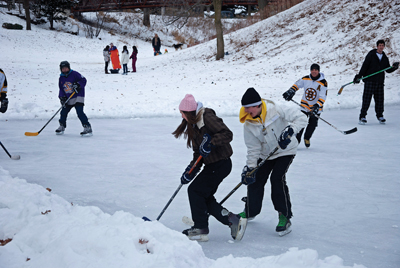 One of the best aspects of this rink, nestled in the valley of the Glen Stewart ravine, is that it is accessible and safe for everyone, from babies and toddlers to school children and seniors alike. The rink has no set schedule and no restrictions on who can use it or what for, unlike a more formal rink such as that in Kew Gardens’. Divided into two sections, the north end is used for shinny hockey games, while the south is solely recreational, meaning that skaters of all abilities can come together in the love of the sport.

It is this sense of community that really comes across when down at the rink, particularly when one sees entire families out on the weekend, a group of kids after school or a parent taking their toddler onto the ice for the first time.

What the skaters don’t usually see is the work that goes into making the ice perfect. After about 10:30 p.m. once the ice is cleared off and scraped, the hose system is pulled out from the temporary shed and the ice is flooded. On cold nights, this process is repeated as many as 7-8 times, under good conditions. “Often getting better as the night gets later and colder,” as Michael told us. The team usually stays out until 2 or 3 a.m. to get the ice ready for a Saturday or Sunday morning skate. On week days they do early morning floods to have the ice ready for 3:30 p.m. after school.

Michael explained that the team is in constant communication with each other regarding every minute detail of the ice. They closely watch the weather conditions to decide on the best ways and times to treat the ice.

Thomas has a long association with the rink and of hockey in general. He comes from a big hockey family with close NHL ties. He himself played and coached before taking it upon himself, along with Brock Grant, to give his time and energy for the last 10 years, (while sacrificing some sleep) to care for the ice.

Michael learned to skate at Glen Stewart rink when he was 2. This is his first year ‘on the job’. “It never seems like a chore. There is nothing like seeing the ice surface polished smooth and  shining like a jewel,” Michael proudly explains. 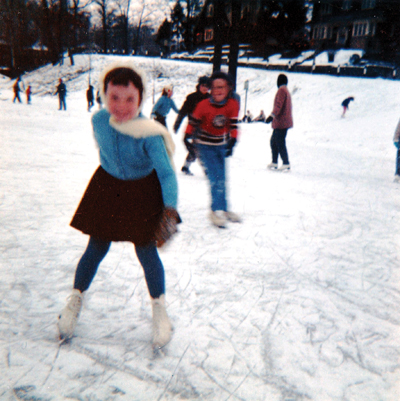 In the case of Michael’s family, Scottish immigrants who came to Canada in the early 1960s, family photos show Michael’s mother Linda Ross skating on the ice with her family, when she was 9 (pictured left). 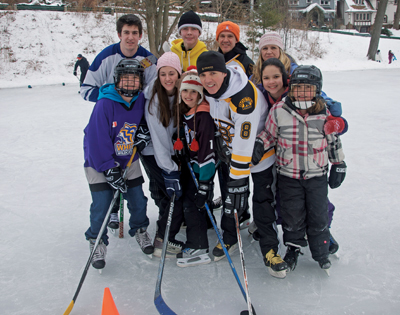 Greta’s Dream Comes True
On January 22nd, the Davey’s family had a hockey party to celebrate Greta’s 12th birthday. Dad, Antony said “Greta had wished for such a thing since winter began. It just seemed so fitting to have the birthday there, after having skated on the rink for the past five years we’ve lived here.” Among the partiers were Greta’s step-sister and uncle and aunt, who hadn’t visited the rink for 25 years. She told us that, “Greta really wanted to do it last year but it did not happen because of the warm weather.”

A Community Jewel Passed Down for Generations
Michael, Thomas and other members of the community have good reason to love this place, the rink having been used by generations of Beachers for over 50 years. It is not uncommon to hear stories of parents and grandparents growing up on the rink.

Lace Up Before Winter Ends
If you have never visited the Glen Stewart ice rink, there is no time like the present. Even the most adamant winter-hater can learn to embrace the season by heading down there on a crisp, sunny day, lacing up your skates and enjoying the “polished jewel” so well cared for by our passionate volunteers.