Following Her Heart with Flamenco Soul 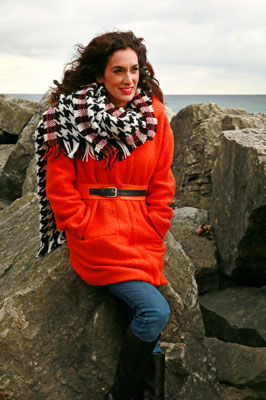 Canadian singer, actor and producer, Amanda Martinez is a rising star – named one of 10 most-influential Hispanic Canadians. Many know her as a radio host (launching Canada’s JAZZFM91 Latin Jazz program), television personality on BRAVO and Star TV! This year she was named honorary co-chair of PanAm 2015’s Ignite program as well as having parts in television shows “No Deposit No Return” and “Working the Engels,” a sitcom with Andrea Martin.

It’s no surprise that Amanda is considered a unique and gifted singer. Her music combines both her Mexican and South African roots to create what many describe as smooth Latin jazz with a “touch of flamenco soul.” Other reviewers talk about her style as including world music, cabaret and pop elements, even a “gypsy flavour”.

She’s performed around the world, including at the legendary Blue Note jazz club in New York, the 2010 FIFA World Cup Festivities in South Africa, and the Pan American Games in Guadalajara. Through 2015, she’ll perform in a series of countdown concerts to the 2015 PanAM Games, as well as speak at events in order to connect athletes and sports fans with musicians and art lovers as the Ignite Ambassador.

For many of those that don’t know, Amanda proved that she could walk away from what some might have considered a dream job to pursue her own true dream.

It happened when the talented young woman was employed in International Trade Finance at a major Canadian bank – responsible for the bank’s relationship with Latin American Banks.  Amanda had landed that job after completing her undergraduate degree in biology, an MBA at York University and a job in Mexico with the Canadian Consulate. As her story goes, Amanda wanted something more in life so she took some time off and started singing at a jazz club. The rest, as they say, is history. 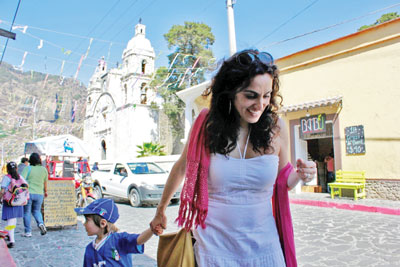 Despite her multi-talents, it was always clear to Amanda that music was her first love.  “Performing is my number one project,” she says, and adds, “There was always so much music in my house growing up.” As a child, Amanda took piano lessons from the Royal Conservatory of Music and always loved to sing. In high school at York Mills Collegiate, she landed a lead role in Grease as Rizzo.

“That experience really ignited something in me,” she recalls. Amanda continued to perform in her spare time until the day she decided it was time to become a full time artist.
Amanda’s parents had a strong influence on her. A typical Toronto multi-cultural story, both came from other parts of the world; her Mexican- Christian father and South Africa-Jewish mother met in Toronto, learned each other’s languages and were married.

“For me,” says Amanda, “My father represents taking risks, being bold, and following one’s heart. When he came to Canada, he actually did it by riding his motorcycle from Mexico! He then started up his own entrepreneurial business.”

“My mother,” she continues, “Represents family and doing everything with grace. She kept the family traditions, for example, at this time of year celebrating both Christmas and Hanukkah. She also taught me never to give up and to put family first.”

Family continues to be very important to Amanda. She and her husband have three children, 2½-year-old twins and a 6-year-old. She often performs with her husband, Drew Briston, a member of the eclectic band, Sultans of String, which was featured in Beaches|life – Dec/Jan 2013. Setting time aside for the children and for each other is a priority.

“My husband and I have busy lives,” she says, “but we love to get time away to enjoy small neighbourhood restaurants in the Beaches.”

This holiday season, Amanda is performing again at the annual CBC Sounds of the Season event at the Glenn Gould Theatre on December 5th. This event includes a live, full day of radio broadcasts along with special guests and musical performances all to support food banks across Canada.  She’ll also be performing at the Richard Bradshaw Theatre on December 18th as part of a free seasonal world music celebration.

To find out more about Amanda Martinez, visit amandamartinez.ca.