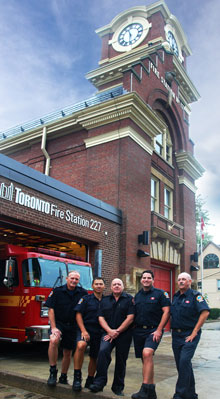 “I’m a local boy working at the local fire station for the local community,” says Doug Browne, fire captain at Station 227 in the Beaches. Located at Queen Street just east of Woodbine, Doug has been captain there for the past 8 years; he’s been a fire fighter since he was 26 years old. And he’s not the only “local boy” at Station 227. Thirty-two years ago, on the day he was standing in the line-up to be recruited for fire fighting services, he stood next to his childhood Beaches friend, Ryan Fairlie. Ryan now also works at Station 227. Others at the station from the community include Jeff Quigg, and the acting captain of Doug’s platoon, Rick McKee.

“As your local firefighters, we do a lot for the community – and it’s not just riding around in a shiny red truck,” says Doug. “Every time we walk back through the station door from a call, we know we have helped someone, it is a very good feeling.”

These days, a typical shift at the fire station starts at 7 AM and last 24 hours. There are five firefighters to a shift, the “platoon” consists of a captain, driver, two firefighters plus one who’s always on assignment away from the station. There’s great camaraderie among the firefighters, who “live” at the station during their shift and make meals for each other.

The daily life and responsibilities of the local firefighters are extremely serious.  These local heroes do save lives.

“The calls we get here,” says Doug, “are substantial, and when we respond, our firefighters know they are dealing with their own neighbours facing a difficult, often a life and death situation.” Local incidents where Doug’s platoon was called include the accident last spring where a car went through a dance studio window on Spruce Hill Road, and a two-alarm fire that broke out in a building during this summer’s Jazz Festival.

Originally trained as a carpenter, Doug made the switch into fire fighting after a customer failed to pay him. Fire fighting wasn’t an afterthought, however. He’d been inspired by what it meant to serve this way from his earliest memories. His father, Chief Bill Browne, had served as a firefighter in the former city of Toronto all of his life.

“As a child,” recalls Doug “I remember every morning seeing my father in his uniform, very handsome, kissing my mother goodbye before he went to work. It was a beautiful sight.”

“I also knew the respect from the community. As he walked down the street, children would wave to him because in their eyes, he also was a hero.”

When Doug finally told his father that he wanted to be a firefighter, his father was extremely proud. 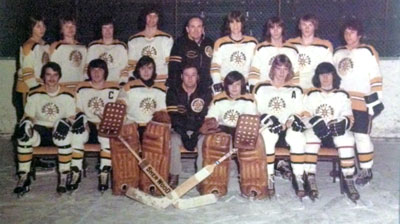 Before they were fellow fire fighters, Dave Strauss, Colin MacDonald and
Doug Browne were teammates on the Dorset Park Bruins hockey team

Browne’s mother, Rodene Browne, was born and raised in a house on Hambly Avenue, where Doug grew up.  Like most of the local fire fighters when Doug left the family home, he didn’t move far. He lived on Wheeler, and then Glen Manor – “always within walking distance of the station.” He attended Glen Ames Public School, Williamson Road Junior School and Malvern Collegiate. He’s also has been a member of the Balmy Beach Club since he was ten years old.

Earlier in his career, Doug worked at stations around the city, but eventually made it back to his own local station when promoted to captain. He’s been captain for eight years, after being assistant captain for six.

Your local firefighters at station #227 are always humbled by the support of the local Beachers. There are many instances when people drop in to say hello, drop off cookies, or send cards. “At Christmas time,” Doug jokes, “I think we all gain a bit of weight because of the goodies people bring them.”

But in return, the crews never miss a chance to respond. When not on a call, they make a point of spotting every child who waves to the firefighters on the truck and wave back. And the door at the station is always open for visitors, and inside the station are two brass poles.

“We don’t use the poles these days,” says Doug, “But we often lift a child up to it so they can pretend they are sliding down.” 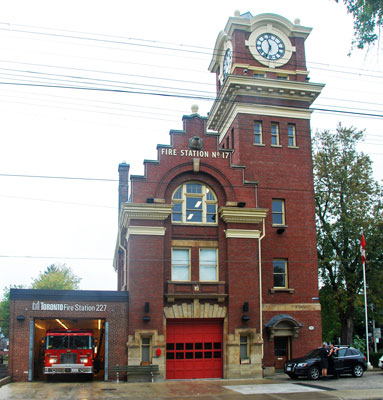 The station recently underwent a $2 million renovation project to the exterior. The wood in the tower and clock was replaced with metal, the roof repaired, along with other mechanical and structural renovations.

Built in 1905, Station 227 was one of the original fire stations for the old City of Toronto (many also remember it as Kew Beach Fire Hall), On the main floor you can even see where the horses were originally tied! The three-storey building features an 80-foot tower. Towers were common in old fire halls because they were used to hang the heavy hoses. The clock was added later.