Bruce Turner – A Local Boy Who Is More Than Skin Deep 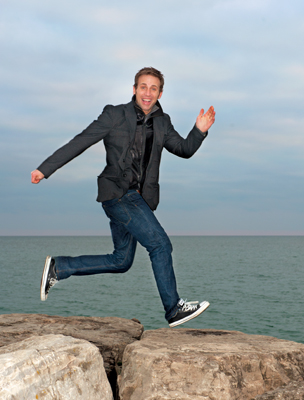 One could easily dismiss Bruce Turner as just another pretty face. True, the host of television shows such as Much on Demand and Style By Jury is good looking, but there is so much more to this affable, energetic Beaches local.

While his career path has taken several unexpected twists and turns, Bruce has always based himself in the Beaches, having been raised and schooled in the Scarborough Bluffs area. The adoptive son of two down-to-earth hard working parents, he remembers spending time exploring the beauty of the bluffs and to this day still makes the most of his proximity to the lake and boardwalk.

With a degree in Psychology from the University of Toronto under his belt, Bruce admits he never really had a ‘master plan’ in terms of career but, at the same time, certainly had no aspirations for a career in television. However, a chance meeting at a gas station with an old friend who then worked at Much Music lead to a job in the maintenance department, located in the sub-basement of the Much Music building.

Bruce became well-versed in the daily running of a television station and before long he found himself rising up through the ranks, working as a floor director and eventually, filling in for on-air presenters. He has always been in the right place at the right time, which, combined with his unmistakeable talent and ability for putting people at ease, lead to his eventual hosting of Style By Jury.

Not simply just another reality show, Bruce is proud of the fact that it goes beyond looks, often focusing on the subject’s personal struggles and issues so they can change themselves from the inside out. He truly believes that ‘you are only as beautiful as you feel’ and this is apparent in both his work and in his personal life.

A compassionate and understanding man, at just 25 years old, Bruce took on a responsibility that other men his age would have balked at – adopting and co-parenting another man’s child. One can hear the pride in his voice when he talks about his adoptive son and how he became an impromptu dad, stepping in to take the role when the mother had no-one else to turn to. Now fifteen, his son splits his time between his mother and Bruce, often making trips all year round to the Turner family cottage in Haliburton.

He certainly admires the work of other celebrities who, rather than settling for being famous, actually put themselves out there, giving a voice and drawing attention to people who need it most. In particular, Bruce looks up to George Clooney, Brad Pitt and Angelina Jolie, mega-celebrities who could easily ride on their celebrity status without using it for good.

Bruce’s sensitivity and selflessness helps him to understand where other people are coming from. More than just a host on Style By Jury, he combines his degree with his understanding to play the role of Life Coach. In addition to this, he is also active in several charities and often in demand as a motivational speaker.

When speaking with Bruce, it is clear that he acknowledges the luck he has had in his 41 years, even marvelling at all the little coincidences along the way, like the fact that his father once worked in what was to become the Chum City building and was more than familiar with the sub-basement Bruce toiled away in for so many years. It is this genuine wonder combined with his energetic, giving spirit that assures this local boy (Beaches’ most eligible bachelor) a successful career in the future and leaves one feeling that he could do whatever he puts his mind to….with a little help from fate of course.

To find out more about Bruce, visit bruceturner.tv