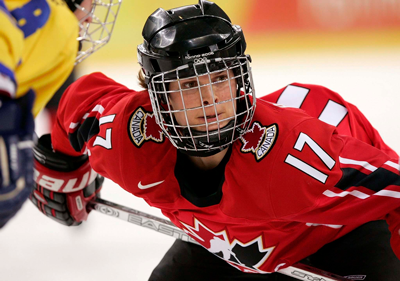 As Olympic fever spreads across the nation, we all recall the many great Olympic moments given to us by Canadian athletes. For example, who could forget the game-winning goal that won our Canadian Women’s Hockey team its gold medal at the 2010 Olympic Games in Vancouver?

Jennifer Botterill, who set up the goal for Marie-Philip Poulin, is one of Canada’s most decorated figures in women’s hockey. Jennifer was a member of the Canadian Women’s Hockey Team from 1997-2011. She is a three time Olympic Gold Medalist (2002, 2006, 2010) and an Olympic silver medalist (1998). She is a five time World Champion and was twice named the most valuable player at the World Championship tournaments.

But after attending four Olympic games – three of them as a participant (and champion) and one as a sports broadcaster and commentator for CBC – Jennifer Botterill chose to stay home this year with her 3-month old baby daughter.

“I was invited to attend as a broadcaster,” she explains, “And it was a big decision. But we discussed it as a family and decided it was a priority for us to stay home this time.” 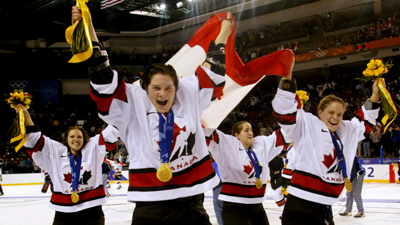 Jennifer and her husband also have a two-year-old daughter. “These early years fly by quickly and we want to enjoy them,” she adds.

Life, however, will still be busy for Jennifer during this year’s Olympics. The Canadian Olympic Committee and the Royal Bank of Canada Olympians hold many events for Olympic alumni while the games are taking place. At such events, athletes from all sports gather to catch up with old friends while they view events together and celebrate victories together.

“I get very excited about the Olympics,” Jennifer says, “I get a little smile on my face. It brings back so many great memories. It was such a tremendous period in my life.”

As a key note speaker, Jennifer often is called up to speak at such events. And of course, she’ll be keeping a close eye on this year’s women’s hockey team.

“They are a very talented group,” she says, “The US team is our big competitor; Sweden and Finland are always strong as well, but it looks promising for our team.”

And her advice for this year’s athletes? “Just remember that it is such a huge privilege to represent your country.”

Some might think that the highpoint for an Olympic athlete comes when you actually compete at the games, especially if you are a medal winner. But Jennifer points out that there are many more unexpected rewards in store long after the Olympics have ended.

“When you come back to your own country,” she says, “Is when you realize that everyone has been watching you and following every game. People can tell you exactly where they were when you won, what it was like watching the games and seeing you there, how they felt when you received your medal. All of this gives you the greatest sense of fulfillment.”

She remembers in particular a 6-year old girl who had watched Jennifer’s hockey team receive their gold medals at the 2010 games. The little girl even sang the anthem along with her parents when the award ceremony was broadcasted. The next day, the little girl put on her skates, and kept throwing her stick up in the air and yelling out in victory. When her parents asked what she was doing, she replied. “I’m practicing for when I win someday.”

The thrill of competition and representing one’s country is second nature to Jennifer and her family. Her father, Cal, is a recognized sports psychologist, her mother, Doreen, competed in two Olympic Games as a speed skater, and her brother, Jason (who played in the NHL), is currently General Manager of the Buffalo Sabres.

Born in Ottawa, Jennifer graduated from Harvard and played for the Harvard women’s hockey team. When she moved to Toronto to play hockey, she lived in the Beaches at Woodbine and Lakeshore.

“Although it meant a commute to the city’s west end where practices were held, it was a very special area,” she recalls.

When Jennifer retired from hockey in March 2011, she’d enjoyed a 14-year career with Canada’s National Women’s Team; played a total of 184 games in a Team Canada jersey, scoring 65 goals and 109 assists for 174 points.

In June 2017, a Globe and Mail reporter wrote about her: “Botterill has experienced more and done more for women’s hockey than most other players. In the history of Olympic hockey and in women’s hockey in general, she is one of the most decorated figures.”

In addition to her work in television as a studio analyst for TSN, and a hockey specialist with CBC’s Hockey Night in Canada, five years ago, Jennifer and her husband, hockey coach Adrian Lomonaco, established a performance school for elite athletes. Journey to Excel is a training centre that provides a variety of services to help people reach their highest potential.