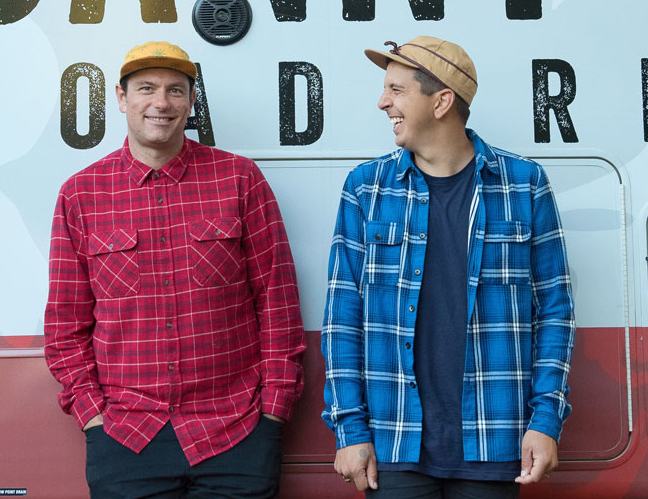 Iron Chef 2011, Chef Chuck Hughes defeated Chef Bobby Flay, which brought him culinary fame. He was declared the youngest and second Canadian chef to win the title. He enjoyed doing Iron Chef even though the pressure was incredibly intense!

Chuck has been a judge on Chopped Canada, and authored two best-selling books “Garde Manger” and “Chuck’s Day Off.”

Chef Danny Smiles also has chef notoriety from TV reality. In 2013, he was first runner up in Top Chef Canada. Truly passionate about his food, the only thing Danny likes as well as cooking is doing TV with Chuck.

Filming Chuck & Danny’s Road Trip was like a chef “fairy tale” for Executive Chef Chuck (40), who co-hosts the show with his best buddy, Chef Danny (31). The show follows Chuck and Danny as they cook and eat their way from coast to coast.

Both Chuck and Danny were born and raised in Montreal. When not travelling in an RV, they work together at one of Chuck’s two restaurants, Le Bremner, where Danny is the chef. Chuck is also co-owner and executive chef at another Montreal hot spot, Garde Manger.

Each chef brings a certain cooking fame to their job. Chuck discovered he liked cooking a long time ago, but only thought of it as a career when he was studying at school. His restaurant was quickly recognized as one of the best in Montreal. 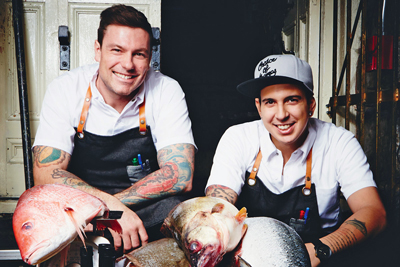 Danny, on the other hand, literally grew up in a kitchen. His parents owned a hotel, and by 15-years-old, he was washing dishes, and a busboy assisting in the kitchen. He attended St. Pius X Culinary Institute in Montreal and interned at Michelin Star restaurants in Italy.

With Italian heritage and a father born in Egypt, Danny combines the influence of Mediterranean and Middle Eastern cooking at Le Bremner, a Quebec restaurant that ranges in style from American, to European, to Asian. By far, his own favourite foods to eat are Asian and Haitian. Growing up in working class Montreal, he was in the middle of the city’s largest Haitian community. To this day, he loves Haitian dishes such as creole, tasso (fried goat) and djon-djon (mushroom rice).

The new series on Food Network Canada kicked off this spring. Travelling in an RV, the two Montreal chefs camp at national parks across Canada, cook, then entertain. They start in the Ontario counties of Prince Edward and Hastings, head to the west coast filming in both Vancouver and Salt Spring Island; head back for a Toronto episode, further east to New Brunswick, and conclude in Prince Edward Island. 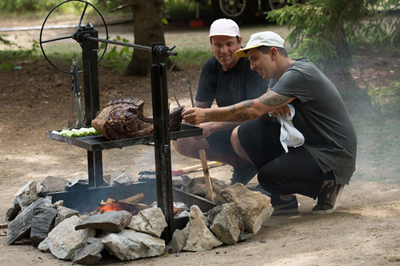 “It was amazing to see the beauty of Canada, such as Fundy National Park,” says Chuck. “It was quite the road trip! 30 to 40 crew and cameramen travelled together… it was essentially a big family.”

“For each of the 6 episodes, we did what any chef out there would dream of doing each day,” says Chuck, “We’d get up in the morning and head off to a market, or visit a farm for fresh eggs, and then cook a meal. In Vancouver, we went fishing first, caught our own fish and cooked it. In New Brunswick, we made the flour and then the pancakes. It’s what you dream about. But we got to live it!”

Each episode focuses on ingredients that are native to that particular area. “The RV carried all the essentials in a small pantry – flour, olive oil, spices, etc.” Chuck explains, “but the main ingredients for each episode were acquired along the way.”

Once Chuck and Danny had rounded up their ingredients, perhaps quahogs, or wild rice, or fresh seaweed, or rare Chanterelle mushrooms, they cook up an unforgettable campground feast for the local chefs, farmers and artisans they’d met while making that particular episode.

The show is unscripted, meaning lots of surprises along the way—which are part of filming a reality series. “There’s always the show you want to make,” explains Chuck, “and the show you end up with. But we always had fun.

“All the time we were cooking together, we were also discovering more about ourselves along the way.”

Danny, for example, discovered that although he has always had a love of cooking, he actually enjoyed TV work. “At first I wasn’t too sure of it,” he says, “but it really helped having my friend as co-host.” Chuck had done other TV shows, including Chuck’s Day Off. Danny also noticed that instead of the fast pace in a kitchen, filming a TV show can take a lot of time. “Time stands still on the set,” says Danny, “whereas in the kitchen, you’re always trying to beat the clock!”

There also is a third activity that unites both Danny and Chuck – hockey. Both chefs play in a Montreal league made up of artists, actors, chefs (basically anyone who doesn’t have to work in the middle of the day). Danny recently celebrated getting 2 goals while Chuck watched on the sidelines with a walking cast on his foot. “I’ll be back in a couple of weeks,” he promises.