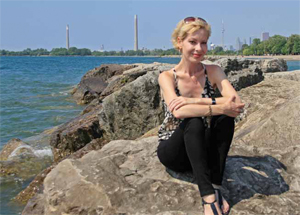 Cynthia Mulligan, Reporter, CityNews, has been part of the Citytv news team for over 20 years. Her success and zest for life, in spite
of hurdles put in front of her, are an inspiration to us all. Just ask her about her job and her life as a reporter, and her eyes light up with excitement and enthusiasm.

“I love my job,” she says, “I love that I have a front window seat on the world as it happens, and I love that I get to meet new people every day.” When asked about the most fascinating person she’s interviewed, Cynthia notes that it is usually the person who never expected to be in the spotlight that proves to be the most interesting. “I find all people fascinating,” she adds, “and I’m a storyteller.”

Cynthia has always had a passion for journalism. She began at Citytv following graduation at McMaster University with an Honours degree in English, first in the Citytv library then briefly as a news writer at Breakfast Television. She “worked her way up”, as a camera person, videographer, reporter and anchor.

Although she’s been a full time reporter now for 12 years, this fall when Citytv launches its new 24 Hour CityNews Channel, Cynthia will be the morning anchor and reporter in the afternoon. “I’ll be able to report on the whole world in the first half of the day,” she laughs, “then zoom in on a specific story in the afternoon.”

Born in Montreal, Cynthia moved to Toronto in high school. Several years ago she moved to the Beaches because she felt it would be a good place to raise her two daughters, now 7 and 11. She
enjoys the “small village feel” of the community. Although two of her favourite places are Kew Gardens and the Glen Stewart Ravine, she has a special affinity for the water and the rocks along
the waterfront near Beech Avenue.

For the past two years, Cynthia has battled breast cancer. During that time she often found herself drawn to the water, where she’d sit on the rocks and watch her children play. “I used the water a lot to find peace,” she explains. “I would sometimes walk all day along the boardwalk to soothe my soul.”

Cynthia was determined to fight back and get healthy again. “I couldn’t change the diagnosis,” she tells us, “but I could change the way I handled it.” Her treatments, which included both radiation and chemotherapy, are over now, and she’s anxious to put it all behind her and start a fresh new chapter in her life. Throughout her treatments, she never missed one day of work.“I feel great”, she says, “I ran 7 km this morning!”

Cynthia has always eaten well and excised often, now she believes even more in healthy eating and keeping up her regular exercise routines. The Beaches community, the teachers at her kids’
school, neighbours and other parents, all reached out and offered support. “I learned to ask for help”, she adds, “and to receive it”. When asked about what she learned from the experience, she says, “Have less and live more.” This new philosophy has led her to downsized from a larger house to a smaller one closer to the water and the boardwalk, so she can have less work and have more time to enjoy with her daughters and all the people she loves.

The Gemini nominated reporter is also an active volunteer in the community. Cynthia dedicates her time to various causes and charities including the Run for the Cure and the Canadian Breast Cancer Foundation, which awarded her the Voice of the Foundation Award this year for her outstanding contribution as a public speaker.

Her blog, “Kicking Cancer”, is now complete, but interested readers can find it at CityNews.ca.