Down With Webster – Our Own Beaches Boys 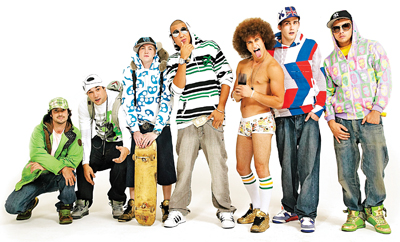 Ever wonder where those school talent shows lead? Down with Webster has made it big ever since a local talent night at Glen Ames School in the Beaches.

Webster is comprised of 8 of the Beaches “favourite boys” (7 band members and a stage manager) aged between 21-24. Today they tour across the country and play Toronto clubs like the Docks and the Opera House, bringing an energy-packed live show to a growing fan base.

Described by one ardent fan as “musical super heroes”, Down with Webster was recently voted Canada’s best unsigned act through a national Rogers/Redpipe contest, which included a $25,000 prize. They’re planning on using the prize money to throw a BIG Party for their fans this summer or early Fall. Watch for the time and place.

They have been together for 10 years. Four of the members first met in Berlin while part of the Canadian Youth Orchestra. The others met at Glen Ames School in 1998.

Their music defies a neat definition, described by some as “real music”.  It appeals to young music fans as well as the generation of their parents and yes, even grandparents.
Since 2003 they have been full time musicians, performing across Canada.  When they go on tour they pack their RV called “the Hurricane”, with 500 packages of frozen dinners and lots of beer.

When asked what would you be doing if you weren’t being “Webster” they replied, “astronauts, circus performers or playing in a symphony orchestra!”

The most exotic place they toured (apart from Halifax!) was Dubai.


Three things Down with Webster wants everyone to know: