Dreaming Big As The Sun 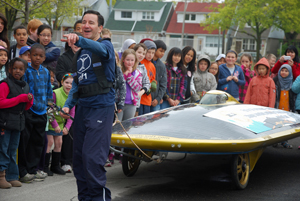 Follow up our story “Dreaming Big As The Sun” published in February Beaches|Life. – Marcelo da Luz and his Power of One (Xof1) Solar Car is heading off for a new challenge, 28 days pulling his solar car from Toronto to Otawa. Taking off this morning 10 am from Earl Haig Jr. Public School after a presentation to 400 students..

Marcelo da Luz, and his team, will be pulling Xof1 Solar Car by hand from Toronto to Ottawa between May 1st and May 28th, 2012. While zigzagging across Ontario covering 475 kilometers, they will be stopping in communities and challenging people to change something, anything in their lives that will help the environment for 28 days. 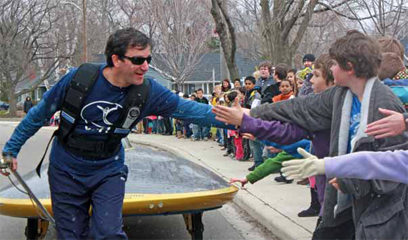 Beaches resident Marcelo da Luz has built his Power of One (Xof1) Solar Car Project right here in the neighbourhood and has driven it to world record fame. It took many years of dedication and hard work to complete this car that runs on electricity generated from sunlight. Marcelo continues to inspire those he meets, especially children, with his story of following a dream.

When Marcelo da Luz grew up in São Paulo, Brazil, he saw first hand the damage that pollution from vehicle exhaust could do to the environment. As a 5th grader in science class, he asked, “Why do adults pollute?” and was told, “it was the price of progress.” That’s when young Marcelo decided to take action. A few years later in 1987, he watched a news report about the World Solar Care Challenge in Australia, the first solar car race. It was then he realized that he could direct his passion into building his own solar car, a race car, powered by light.

In his 20s Marcelo moved to Canada and worked at Air Canada. Through his young adult years, Marcelo tried to put his dream aside, but he just couldn’t forget. “The pain of not following the dream became unbearable,” he says, “I had to do something about it.” He just could not stop talking about it.

One day, his roommate left him a note with some printed research material from the University of Minnesota. It stated that it takes 50,000 hours to build a solar car, an equivalent of one person working 40 hours per week for 25 years, Good Luck Marcelo!”. “This pushed me over the edge” says Marcelo, “it’s now or never, the decision to begin the project was made.” At 31, he began the project in his small garage next to his home in the Beaches. Since that day, Marcelo had spent most if not all his waking hours working on his dream project, anywhere from 8 to 16 hours a day. 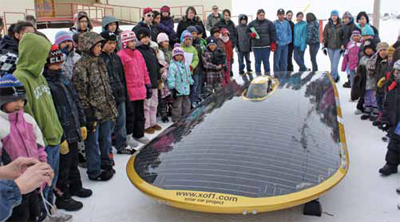 Neither a scientist nor engineer, Marcelo started by researching rules and regulations of the World Solar Challenge. He then sketched ideas for the car and a friend helped him with a computer design. Various small-scale models followed, including a shaved block of foam and an electric-motor-driven model running on what he called “bottled sunshine.” When ready to build to scale, Marcelo reached out to companies and organizations for services, parts and discounted materials.

To put his solar car, Xof1, together, he assembled an international team of volunteers from all walks of life, including homemakers, engineers, nurses, and teachers. Friends and neighbours also helped out, particularly during the lengthy sanding process.

Although he wasn’t able to get sponsors, many inspired supporters offered donations, including a local homeless man who gave him $20. A Beaches resident loaned him a studio on Kingston Road. When it was time to do body work, painting and solar cell protection, Marcelo used Michael and Michael Auto Body shop on Kingston Road.

Once built, his major challenge was testing the vehicle, because in Ontario, solar cars with foreign licenses aren’t permitted on public roads. To get around this roadblock, Marcelo’s team bypassed the regulations by testing the solar car in March 25 on frozen Lake Simcoe. Other challenges included financing and driving a car that looked more like a space ship than a vehicle. When traveling through the US, the police would often chase him because locals would report the car, sometimes even as a “UFO.”

Since that first test, however, Marcelo has broken many records driving his car, including the long distance record for a solar vehicle – 15,070 km. With the help of volunteers following him in a support van and trailer Marcelo cut across the northeastern United States (to avoid Ontario’s roads) at speeds up to 120 km/h, then reentered Canada at Manitoba and traveled north to the Arctic Circle. He then drove back roads at 70 km/h, getting stuck in places for weeks because there was no sun to recharge the solar cell batteries. 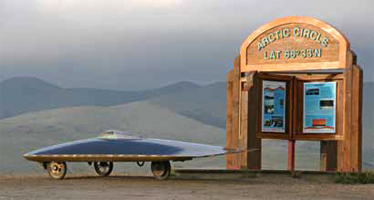 Marcelo and his solar car Xof1 at the Arctic Circle

Although the solar car is Marcelo’s claim to fame, he’s also a living example of the power in following your dreams. With countless challenges through the years, Marcelo knows first hand what it’s like to almost see that dream die, then take up the cause and continue to reach your goal.

As a result, Marcelo has spoken to hundreds of children about the importance of pursing your dreams regardless of the obstacles that seem to be in the way. Marcelo’s next challenge?

Currently, he still hopes to be able to drive his solar car in Ontario. From April 10 to May 8 Marcelo will pull his solar car from Toronto to Ottawa. This is to raise awareness and support for the environment. For these 28 symbolic travel days, which he is calling Xof1 Pull for Environment, Marcelo invites everyone to join him with their own challenge, be it giving up disposable coffee cups or walking to work.