Everyone Has a Story: Adrienne Arsenault 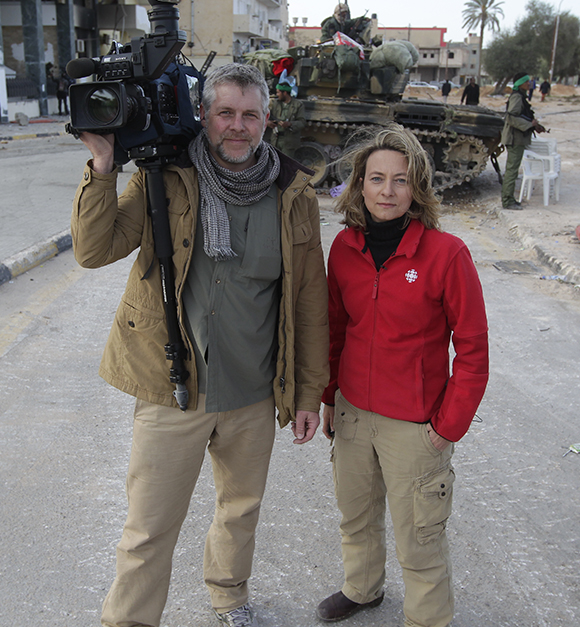 Frontline reporter and co-host of CBC’s The National, Adrienne Arsenault, travels the world to countries hit by war, famines, disasters and conflict, and she always finds “family” wherever she goes. It could be with her friends, mother or her godson in Toronto, or when she’s thousands of miles away from home, working with a small international news team covering a story in Africa.

“When you’re on site, perhaps with a producer, a camera man and a local driver, the team becomes your family,” she explains. “You are all working together toward the same goal – to see and deliver to people at home what you are experiencing now, as closely to what is real as possible.”

It’s why she’s always love to write and report about things that impact peoples’ lives, “Everyone has a story,” she says.

Even on those rare occasions when she’s back in Toronto and is able to cook (which she loves to do), cooking and entertaining takes her back to all those times when she’s felt the presence of family.

“For me, the smells and tastes of Middle Eastern cooking represent comfort, friendship, sharing and zest,” she says. “When I cook Middle Eastern food, it takes me back to my days in Jerusalem. Immediately I see the faces of all those I associated with during my time there.” (From 2003 to 2006, Adrienne was the CBC’s Middle East bureau chief in Jerusalem.)

So how did the former “head girl” at St. Clement’s School in mid-town Toronto end up covering some of the biggest breaking global news stories of our time?

It’s not too difficult to figure it out. Born and raised in Toronto, Adrienne’s family life growing up prepared her for a life that would always revolve around television, the news, and in particular, life at the CBC. 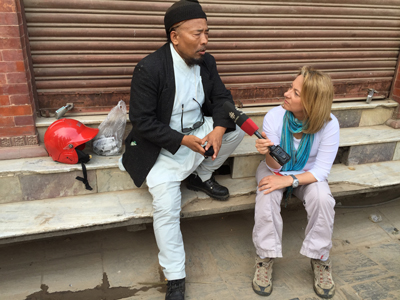 Her father, Ray Arsenault, was a TV director and Canadian television pioneer. He produced the early Hockey Night in Canada programs, directed series for Canadian television and helped launch the first telecommunications satellite. His presence meant that television was always a big deal in the Arsenault family. Ray even tested the kids with quizzes when watching TV, asking to see if they could tell the difference between a show that was live or taped.

“I also was babysat on a TV set,” Adrienne laughs, “I had my naps during the taping of shows like, The Trouble with Tracy, an early CTV sitcom.

News was another big deal, she says. “We had a big radio with a major antennae. We’d literally plug it in over dinner hour so we could listen to As It Happens, and Cross Country Checkup.” She admits to phoning in several times, but never getting on the air!

“And the truth is, I didn’t really realize there were any other channels but CBC!”

So following a degree in international politics at Western University, she enrolled in  journalism. After graduating in 1991, she started working at the CBC as an editorial assistant, and then moved into roles of foreign correspondent and national reporter. Over the years, her postings have included Vancouver, Washington, Jerusalem and London. She has reported from the sites of widespread flooding in Pakistan, political uprisings in Libya, the tsunami aftermath in Sri Lanka, even the Ebola crisis in Africa.

Today, she hosts The National, alongside Rosemary Barton, Andrew Chang and Ian Hanomansing. As part of her role, she continues to travel, having just come back from Colombia.

“It can be scary work,” she admits, “ And the happy ending isn’t always what you hope.” She talks about frightening times in countries such as Zimbabwe when the crew was pulled over and detained. There were also times she wanted a story to turn out differently. But there’s an overall theme to her perspective. In all her travels, Adrienne continues to be struck by the overall goodness of people.

“I’ve met way more people who inspired me to pull up my own socks and be a better person than those who disappointed me. In fact, I’ve never been through a terrible situation, a war, a disaster – when I walked away thinking that people were bad.”

“Fundamentally, the human instinct is to reach out.”

It’s not surprising that when Adrienne returns to Toronto she is happy to be “a bit of a hermit”. In fact, people are sometimes surprised that she’s somewhat shy. She’s a big fan of sports, attends a local Boot Camp when she’s got the time, and if she can, visits the Beaches, which she describes as a “transportive” kind of place.

She also spends as much time as she can with her mother, Bette, who turned 90 this fall. “She’ll be mad at me that I told her age,” she admits, “But I’m so impressed with her. She is such a trouper: fit, busy, opinioned… she’s great.” When Adrienne set off to cover the Ebola virus outbreak in West Africa, instead of being cautious her mom said, “Well, it’s about time!” (Adrienne won a 2015 International Emmy for her work covering the crisis.)

As for the future, Adrienne has never believed in some grand plan. “I feel like I’ve tumbled into whatever I‘ve done. I just want to continue to capture and report like we’re doing.”

“People deserve a whole lot better than what they typically hear on an average news day. I want to report, the stories with clarity, the right facts, and the right nuances to take them into what is really happening”.

She also has never been one to be chained down. She loves to write, and loves to become immersed in a story. That can only happen if she keeps traveling.

Arsenault was named the Commonwealth Broadcasting Association’s Journalist of the Year. She has won two Gracie awards for outstanding female correspondent, a Monte Carlo Festival award for her coverage of the Zimbabwe election and several Gemini and Canadian Screen Awards.