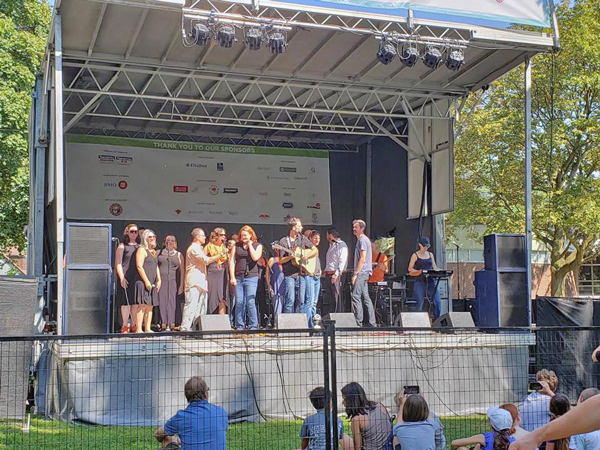 As the locals call it, the Pocket, is also known to a homegrown choir, MAMALS. A group of neighbours who is living their music dreams in the comfort of their neighbourhood.

The group started with neighbours just getting together and jamming to their favourite tunes. Now they have 24 members, a self-titled EP and a music video for their new song Grubby English Town. Not to mention, the video was a Zoom creation.

James and Mary Boyd started inviting neighbours to their home in 2018 for monthly neighbourhood get-togethers. The parents would hammer out covers, while the kids ran about. The group was composed of a choir element and some band players.

“It was like Choir! Choir! Choir! with a potluck and drinks. There is a sense of community. We live in the same neighbourhood, kids go to the same school.”

James and Mary lived in England before immigrating to Toronto and settling in the east end. The couple met in university where James studied classical music and played party songs with his university band, that is still playing at events in London. “I was a major groupie,” says Mary.

“After university everyone in England wants to move to London. Similar to Canada, where everyone wants to move to Toronto,” says James. He pursued work in the music industry, but it didn’t come easy. He had eight interviews before landing at EMI Music Publishing and Demon Records, doing licensing for both record labels.

The duo moved to Toronto and ultimately settled in the Pocket neighbourhood, which sits south of the Danforth, tucked in between Jones and Greenwood Avenues. “There is a lot of connection between the families in the Pocket,” says James. He says he has never lived anywhere like it.

Eventually, the basement jam sessions started to grow and had deeper meanings amongst various members of the band.

“When I was younger, I loved playing music. It was a huge part of my life. I didn’t end up going into any of the music programs. My life took a different path. Real ‘grown up’ stuff started taking over and I rarely picked up an instrument for many years,” says choir member Heather Pollock.

“Then I was asked to join MAMALS. It’s a marvellous collective of kind-hearted and creative people, and the energy and positivity of it re-lit my creative fire,” she says. 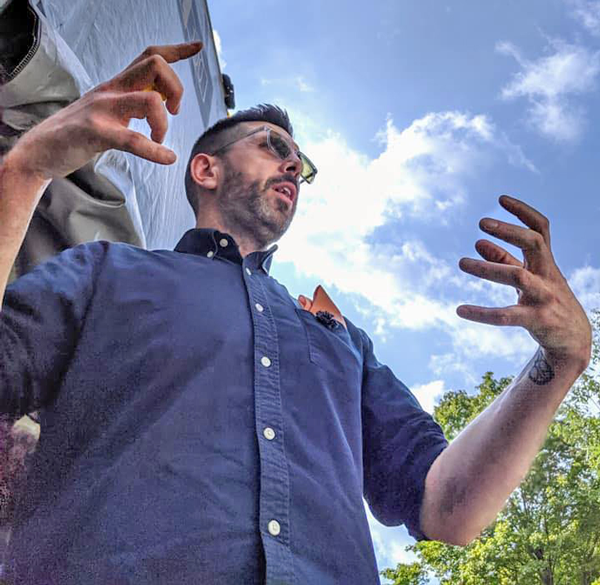 “Last September I was away on holiday for a couple of weeks, and when I walked into my house, the first thing I saw was a beautiful digital piano covered with bows, and a note from MAMALS members who live on my street. I broke into tears, and wandered around the neighbourhood hugging people,” says Heather.

None of the neighbours do music for a living. “There is a large contingent of teachers, a university lecturer and the Pocket handyman,” James says.

“The key thing to know is music is not about becoming an expert. For 90 per cent of people it is about the connection and meeting people. I’m still friends with my band from university that I met 20 years ago, living on a different continent,” says James.

The pivotal moment that led to the creation of MAMALS was when James went to see another east end band called The Sidewalkers.

“I went to a party one evening and The Sidewalkers were having the best time. They just did it, just to do it. I had worked at record labels. And I was like this is the reason to do music.”

The evening inspired James and Mary do more than covers, and to create original music with their neighbours. “When you make original music, it doesn’t matter if anyone likes it. It’s that it stays with you forever,” says James. “We started taking practice serious, so we banned the kids and got teenagers to babysit,” James and Mary say jokingly.

MAMALS continued to hold sessions at the Boyd’s house and occasionally at a local community centre. James and Mary wrote music. Ian Bodzasi, who has worked with Nelly Furtado, Katy Perry and Sam Roberts, mixed and mastered the music.

“People think if you hear something on the radio, you can’t produce that music because it is out of your scope. You hear a song and think you can’t play it, but once you start to learn, or you play those Rock Band games, you see the chords are simple,” James says.

“You don’t know what you are truly capable of until you put yourself out there fully. Who knew I could play drums well enough to back a live band with 20 plus members. And who knew that so many of my neighbours and friends were as talented as they are,” says MAMALS drummer Jack Gagliardi.

In 2019, MAMALS was featured in numerous publications and news channels like CBC and CTV news. They performed at events including a fundraiser at Michael Garron Hospital and Eaton House. The band also has its own MAMALS apparel.

James says the 2020 plan was to release six new songs. “We would do a set of our own music then do sing-a-longs with music goers,” says James. The choir ensemble was taking singing lessons from the talented coach Lizzy Clarke before the pandemic.

“We initially thought we were done, but we came together on Zoom,” says James.

The band recorded their parts remotely using their computers and iPhones. In some cases, James would drop off his laptop to a member’s porch.

“Recording my part during this time was a welcome distraction. With all the unknowns and overwhelming news that we were being inundated with, I was so happy to fully immerse myself in this wonderfully creative process,” says choir member Nicole Sheehy.

The finished product is a music video for Grubby English Town which can be watched on YouTube. Although 2020 has taken an unpredictable turn, the band members remain positive and have plans to get more music out in 2021.