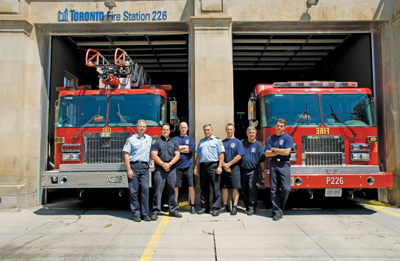 Getting insight from the firefighters from station 226

T he historic fire station at Main and Gerrard  houses 40 local heroes. Beaches|life sat down with Station 226’s Crew A, Captains Gary and Ken, and firemen Clay, Bill, Tony, Tom and Mark (alias, “the Rooster”). Bill (second from right) and Mark (third from left) grew up in the Beaches. Bill has been at this station for over 18 years.

The 40 firefighters are divided into four teams of 10, referred to as Crew A, B, C and D. Each Crew is on duty for 24 hours at a time, with a total of 48 hours per week. The station has two trucks, an aerial (ladder truck) and a pumper.
“This station is twice as big as many other fire stations in Toronto, and our guys are twice as good looking.”

Firefighters respond to most 911 calls, and are usually the first to arrive. When an emergency call is received it takes four minutes for a crew to get there. The men stop anything that they are doing, get dressed and are ready to go in 70 seconds (and yes, they use the pole to slide downstairs).

During that consecutive 24-hour shift, twice a week, week after week, year after year, your crew is your family. They take care of each other like brothers. Everyone takes turn with household responsibilities, from grocery shopping to cooking three meals a day and cleaning up the station. 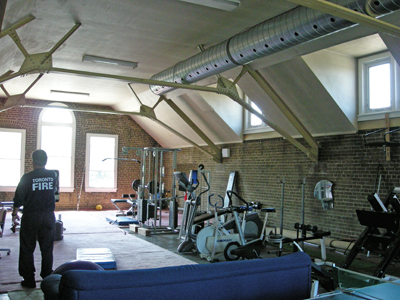 Healthy lifestyle is a top priority for the fire fighters. They ensure their daily meals are hearty and well-balanced. “We have fresh salad every day.”  Bill and Russ are notable chefs, and share favourite recipes with other stations. To help stay physically fit, the guys exercise daily at their gym in the station. Many firefighters participate at the annual World Police & Fire Games, held in Vancouver this year.

Firemen are active volunteers in the community. Along with visiting local schools and giving tours of the fire hall, they also educate kids and visitors about fire safety.
In their spare time they play in organized hockey and golf leagues with the same crews from other stations, because they share the same work schedule. Tom coaches girls rep hockey, Gary teaches karate, Bill helps organize the Firefighters Hockey League that plays at Tim Reeve Arena.

Firefighters are always aware of the risk of their job. A particular experience that sticks in their mind was last year’s explosion on Second Avenue. “That’s when you realize how close you are to each other, it’s like being brothers.”

When asked what they like most about their work, they replied: “It’s rewarding to help others. Plus people are very appreciative. And every day, every call, is different.”