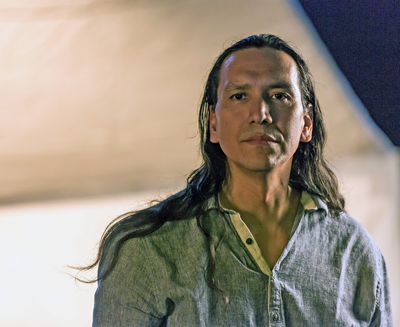 From Hollywood to First Nations, from actor, dancer, choreographer to director and educator, Michael Greyeyes truly has it all! Recently as a featured Canadian actor he attended the 42nd Toronto International Film Festival (TIFF) for the world premier of Woman Walks Ahead, directed by Susanna White, starring Oscar nominee Jessica Chastain as Catherine, and Michael as legendary Sioux chief Sitting Bull.

Later with his family, attended another Canadian premier film, Indian Horse, in which his oldest daughter Eva Greyeyes made her first film debut. Eva is currently a high school student in Toronto. “She truly has a natural ability,” says her proud father.

Getting to know Michael beyond a teacher or actor gives you a glimpse into the extent of his contribution to Canadian performing arts, and in particular, Indigenous artists and performing groups across the country.

Michael is a Plains Cree from Muskeg Lake First Nation in Saskatchewan. He was born in the small community of Balcarres, Saskatchewan, and then grew up in Saskatoon. Both parents were First Nation, and both attended residential schools in that province. Years later, Michael created a dance-opera called Bearing about the impact of residential schools both past and present. Bearing premiered at Toronto’s Luminato Festival in 2008. 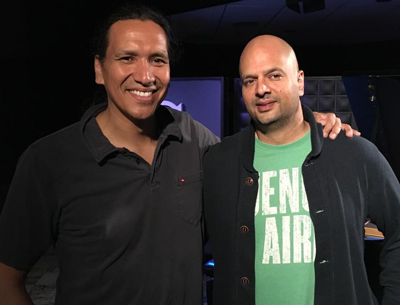 “The value of art,” says Michael, “is to illuminate, elevate and inspire. I believe that it is through art that we can find a true mechanism for change.”

He soon turned to choreography and directing his own theatre work. In 2010, Michael founded Signal Theatre, a Canadian non-profit theatre organization with a mission to create new theatre works that included dance, opera, music, design and the spoken word.

“As working artists,” he adds,” I’m grateful for the opportunities given for Indigenous voices to be known.” He explains how this includes support provided by festivals such as Luminato in Toronto. 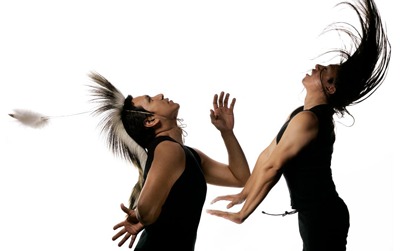 Even the selection of Woman Walks Ahead by TIFF as a red carpet gala was an important statement. “TIFF is very tightly curated”, he says, “So just to be one of the few chosen for a gala premier was fantastic.”

As an associate professor at York University, Michael has been teaching at the world-renowned Theatre Department, Centre for Film and Theatre for the past 13 years. People may recognize him from many of his film and television roles over the past 30 years. His most recent role, Qaletaqa Walker in AMC’s “Fear the Walking Dead”, begins its third season this fall. Feature films include “The New World” and Passchendaele. Other TV work includes appearances in Law and Order: Criminal Intent, the title role in Crazy Horse, Tecumseh in Tecumseh’s Vision and mini-series such as Klondike, Saints and Strangers and Dreamkeeper.

Many projects in which Michael has been involved as an actor, choreographer or director feature Indigious themes, stories and Indigenous performers. His opera work, entitled Pimooteewin (The Journey) is the first opera written in the Cree language. The work toured to northern communities in Ontario in the spring of 2009 and 2010. Signal partners with numerous Indigenous art groups including the Native Earth Performing Arts and the imagineNATIVE Film + Media Arts Festival.

As for indigenous art in Canada, Michael is very optimistic. He sees great things ahead, given the many talented writers such as Marie Clements and Kenneth Williams, and theatre companies such as Signal and Native Earth Performing Arts. A highlight was the recent announcement that there would be a new Indigenous Theatre Company at the National Arts Centre in Ottawa, to be launched in 2019. 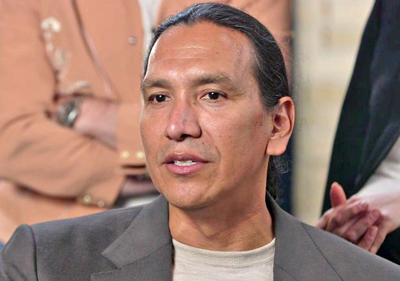 Michael, his wife Nancy and daughters Eva and Lilia live in central Toronto. Currently on sabbatical from his post at York University, he is starting season three of Fear the Walking Dead and getting ready for the premier of his next big work, the staging of Claude Vivier’s Zipangu, a co-production between Soundstreams and Signal.

Currently he is waiting for news about the Indie film Woman Walks Ahead to be picked up by an agent or distributor.