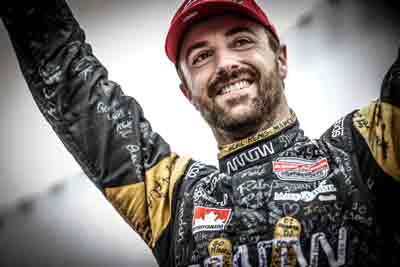 Fresh off his big win in Toronto, where he placed third at the Honda Indy this July, Canadian-born race car driver James Hinchcliffe is doing exactly what he’s always wanted to do: race powerful cars at high speeds!

“I was eighteen months old when my dad took me to my first IndyCar race in Toronto,” he says (known at the time as the Molson Indy), “I’ve never missed that particular race since.” In fact, starting in 2006, James always been PART OF the race in Toronto!

This was a breakthrough year for James as he reached the podium at the Toronto Indy, for the first time, finishing in third-place. “We were really pleased with the result,” he says.

He calculates that his car, an Arrow Electronics Honda-powered IndyCar, reached a speed around 300 km/hr.

“Indy cars are basically ‘fighter jets’ on the ground,” he explains, “And it’s the competition that fuels the drivers.”

Born in Markham, the 29-year-old grew up in Oakville, Ontario and has always known that racing was his passion. “I can’t really tell you why,” he says, “I just know that I’ve always wanted to race – especially now that I can do it for a living. I know there’s a risk, and all drivers accept that. But the reward is worth it.”

James credits his father for getting him interested in the sport. Born in England, his father was a fan of racing, and made sure his son learned about it at a young age. At 9 years old, James got his first go-cart as a birthday present; he also started racing at Stouffville go-kart track that year. 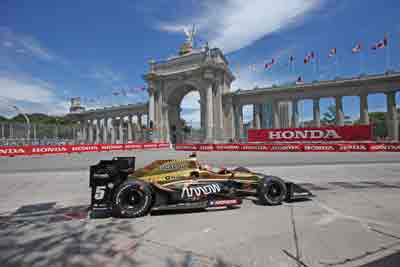 There are various classes of car racing. IndyCars are known for their high speeds (due to powerful motors), having a single seat and open wheels. Although Indy races today only take place in North America, James has traveled five continents competing in various racing series before he settled on the Indy series: Firestone Indy Lights, Atlantic Championship, Star Mazda Series, and Formula BMW USA.

There are aspects to car racing that may surprise someone not familiar with the sport.

“Car racing is very much a team sport,” says James, “because so much of it is a technical exercise that requires expertise beyond than just a driver.” For example, there are 5 engineers and 10 mechanics assigned just to work on each individual car.

Another aspect of the sport is the camaraderie despite the competitive nature of the sport. When not facing each other in competition, drivers and crews treat each other like family. “We all have tremendous respect for each other because we spend 20 weeks of the year traveling together, and because of the inherent risk in the sport, we hold each others lives in our hands.”

Racing is also a physically-demanding sport. In order to withstand the G-forces at play during rapid acceleration, drivers like James have to be in top shape in terms of core strength, upper body muscles and neck. Equally importantly, is the cardio aspect of each race. During an average race, a driver’s heart will reach somewhere between 160 and 180 beats/per minute for 2-3 hours. “It means we need the same cardio endurance as a marathon runner,” says James.

Specialty trucks transport the racing cars from race to race as well as all their spare parts and equipment. A car like James’ is valued at around $500-600,000 each plus a leased engine. The drivers and their crew fly.

There are times when James is not racing! He enjoys a few days away at his cottage in Muskoka, or scuba diving in the Caribbean. Does he race boats? “No,” he says, “On the water I chose the slowest pace possible!”