Canada’s First Lady of Fashion, Jeanne Beker, has been a household name through her 27 years as host of Fashion Television. Reporting on style and fashion across the globe set Jeanne’s footprint, not only in all mainstream Canadian media, but also internationally from Paris to Milan, Toronto to New York.

Parents, Holocaust survivors from Poland, Jeanne was born and grew up in Toronto. She first launched her career as an actor at CBC Television, then studied theatre at York University, and went to Paris to study mime.

In 1985, Jeanne hosted the Canadian iconic show Fashion Television (FT), which was in production until 2012. From FT to her many other appearances and involvement in the fashion world, she earned the title Canada’s First Lady of Fashion. She has written articles on fashion and style for the Toronto Star, The Kit and The Loop and is currently a columnist for The Globe and Mail.

Jeanne has some surprisingly pragmatic advice for wannabe fashonistas – be true to yourself, be comfortable, don’t invest in clothes that are difficult to care for, and if you don’t love it, don’t wear it!

Jeanne says that around the house, she’s often wearing yoga pants (good quality) and a sweatshirt, as long as what she’s wearing makes her feel good. She adds that she does make sure her hair looks good and she’s wearing a bit of make up “in case a camera shows up at my door.” Not surprising considering the many activities taken on by this multi-tasking woman, who others have looked for fashion advice for three decades.

For Jeanne, fashion is part of how each of us communicates about who we are. For this reason, she emphasizes that it’s important to be true to ourselves when we select our clothes. “It’s not about keeping up with trends, or wearing what your friends like,” she explains, “you need to embrace who you are, which means loving yourself first and foremost. Clothes can be transformative, but if you don’t like yourself in the first place, you won’t find something you like to wear.”

As for sensible fashion advice, Jeanne is a big believer in investing in strong basics. “If you wear black pants,” she says, “then invest in 2-3 quality pairs that won’t fall apart.”
“You want clothes that are chic, make you feel put together as well as comfortable and take you through the day. Many of us don’t have time to change so you need outfits that you can dress up or down.”

“Any outfit that is absolutely comfortable and you feel good when you have it on. If you don’t love it, throw it out!” 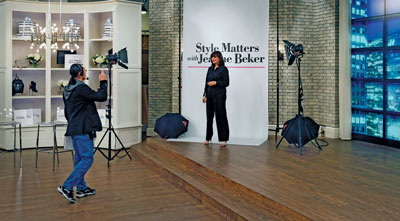 Jeanne is excited about the show, which not only brings in products from all over the world but gives her a chance to talk with people on air, live, about fashion.
“I love the connection part of this new venture,” she says. “After 27 years of doing programmed television, it is fun doing live TV. I get to talk with a much broader, cross generation sector of people. I also get to continue the dialogue I’ve had with so many people over the years who are now looking for fashion advice as older adults.”

The show also represents a change in how Canadians live their lives.

“We’re changing the way we shop,” says Beker. “Online gives you access to all kinds of delights as well as the chance to learn about a product, how and why a certain piece works. We’re bombarded every day with so many choices that you need someone to curate the pieces for you.”

Despite her passion for fashion, Beker is quick to point out that she doesn’t live and breath fashion 24/7. Jeanne’s favourite pastimes include travel, spending time in Ireland, visiting her two daughters (one in Montreal, one in the Yukon) and walking her dog along the boardwalk in the Beaches. “I love all the wonderful restaurants in the area,” she says.

Although a Toronto city girl, she has a farm outside the city that includes a stone farmhouse built in 1842. She also attends live concerts, loves jazz and owns an investment in a resort in Peggy’s Cove, Nova Scotia.

“Fashion is a part of the way we move through the world, but life is not all about fashion,” she adds. “Its important to remember that even when you work in fashion all the time.”
Style Matters with Jeanne Beker debuted March 12 at 8 p.m. ET on TSC and tsc.ca, as well as the ShopTSC mobile app for iPhone and Android, with full episodes available online next day.

Photos courtesy of The Shopping Channel