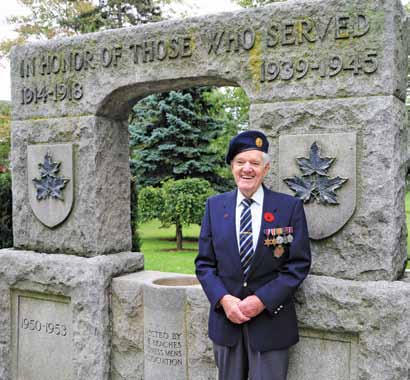 A special feature honouring Remembrance Day with a story from a local World War II Veteran.

At 89, Jimmy’s eyes sparkle when he talks. The Canadian veteran remembers every date and detail, like the day he signed up the Royal Canadian Army Service Corps when he was just 20, his trip overseas in 1942 with military service personnel on the Queen Elizabeth, or his time rebuilding bridges two months following the D-Day invasion on June 6, 1944.

A native Torontonian who attended Central Tech School, Jimmy enlisted in 1942, then spent over a year training, first in Canada then England. Jimmy was one of the 850 members of the 86th Bridge Coy, a service division of the army with the sole purpose of rebuilding bridges destroyed by retreating troops.

“When I arrived on the Queen Elizabeth,” he recalls, “George VI announced that we were the largest contingent of military personnel to date.”

Almost 2 months following D-Day, his company was deployed to the continent (France, Belgium, Holland). Their mission was to “pick-up” hundreds of pre fabricated truss bridges called Bailey Bridges that were being dumped around the
countryside. Each platoon would then rebuild the bridges across key transportation points, usually rivers, for foot and vehicle traffic. With the war still raging, most times they set up the bridges while being fired on by retreating troops. “Sometimes to anchor them on shore,” recalls Jimmy, who drove the trucks to the sites. “we’d weigh one end down with a Sherman Tank!” 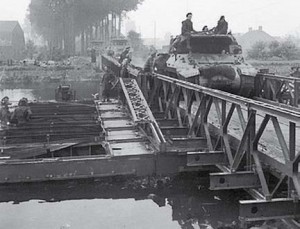 The Bailey bridge is a portable, pre-fabricated, truss bridge. It was developed during World War II for military use. Its advantages include: no special tools or heavy equipment to construct; wood and steel elements were small and light enough to be carried in trucks and lifted into place by hand; strong enough to carry tanks. Bailey bridges continue to be used in civil engineering construction projects and to provide temporary crossings for foot and vehicle traffic.

“What most people don’t understand,” Jimmy explains, “is that not everyone was a soldier on the front lines. It took 25 of us “army service” people to keep one soldier in place.” Such service work included feeding and clothing soldiers, getting the mail through, even stringing up miles and miles of wires for communications.
Fortunately, for Jimmy, being a member of the Bridge Co. meant he didn’t have to shoot at enemies, “we just chased them back and rebuilt the bridges,” he says. When Jimmy was first deployed, he wasn’t at all prepared for what war was all about. Crossing the Atlantic just seemed like a great adventure, but once he landed in England, everywhere he looked he saw men and women in uniform, at war. No one knew what was planned for June 6, 1944, but the morning of the invasion, Jimmy recalls the sky overhead being black with British planes heading for France then returning. “It went on and on, the whole day.” That was when he realized that something big was happening. 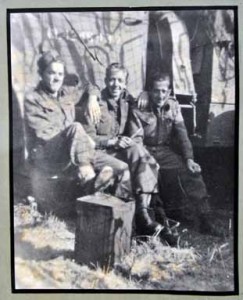 (from left) Jimmy Canning, Jack French and Freddy Nevard in Holland, 1944 – they spent 3½ years together.

Still, there are memories Jimmy won’t talk about: “you’ll never see it, so you don’t need to hear it,” he says. Like thousands of veterans, the war had a profound effect on Jimmy’s life. Sleeping in trucks and on damp ground in Holland left him with a serious lung condition when the war was over. He spent 14 months recovering, and then as a young man who’d missed most of his twenties, he needed to find work and start a career.

It was also after he returned to Toronto that his met his wife at the Palais Royale, a popular dance hall on the waterfront. Jimmy and his wife raised their six children in the Beaches since 1965. Jimmy’s careers included car salesman and truck driver, both related to his war time duties of driving. Today, he continues enjoying his friends, hobbies, grandchildren and great-grandchild.

This lighthouse is from Jimmy’s collection and was built in his workshop.

A poet since age 8, Jimmy has written hundreds of
poems. He also has a passion for lighthouses, “many
of my army buddies were from the Maritimes,” he
reasons, “and lighthouses were known as sailorsguardian angels”. Jimmy proudly
displays one beautiful, miniature
lighthouse he built out of wood.

For the past decade, Jimmy has laid a wreath at the Key Beach Cenotaph on Remembrance Day. In quoting his poem, “We Shall Remember Them”, he writes:

Lest we forget – remember well,
These all were heroes, men who fell.
Forever now and in November,
We shall remember, we shall remember.
– Jimmy Canning