Jonny Harris Helping us all Take a Lighter Look at Life 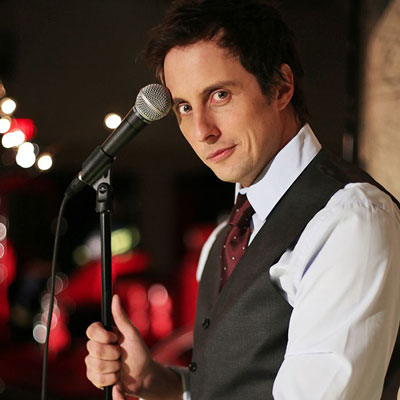 Canadian actor and comedian Jonny Harris figures he was the only kid on the planet who had parents who encouraged him to actually go to theatre school! They must have seen what Canadians, who follow Jonny, also love about him – a warm, funny comedian from Newfoundland and Labrador, who helps all of us lighten life’s load by taking time to laugh a bit at ourselves.

Jonny, at age 42, was raised in Pouch Cove (pronounced “pooch”), in the province of Newfoundland and Labrador. The small fishing town of about 2,000 people lies on the northeast Avalon Peninsula just 27 km, north of the capital, St. John’s. Although he was a smart kid, Jonny wasn’t too enthusiastic about his studies at Holy Heart High School. Fortunately, he got involved with the set crew for the school play, and then he joined the improve team. “I guess I was always kind of a ‘funny guy’,” he admits. 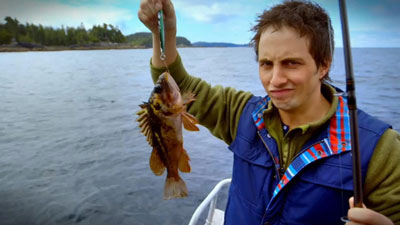 It was then that his parents told him about the 4-year B.A. theatre program at Grenfell Campus, part of Memorial University Campus in Corner Brook. Both his parents work at Memorial’s main campus in the capital, St. John’s; his father is a British philosophy professor, and his mother a conference coordinator.

After graduating, Jonny’s career started with short character monologues, some local roles and appearances at comedy festivals, and then a one-man show he wrote called Out of The Bog in 2003.

A big break came when he worked on Mary Walsh’s show, Hatching, Matching and Dispatching. The show connected him to the TV and film industry in Toronto, and allowed him to further explore his stand-up skills. “As a comedian,” he explains, “It takes time to develop your voice, know what kind of comedy works for you.”

Today, Harris is best recognized for his roles in the CBC television drama series Murdoch Mysteries and stand up shows Still Standing. Although both are viewed on TV, each one is produced very differently and draws on a different kind of comedic skill, and for Still Standing, writing skill.

In Murdoch Mysteries, he plays Constable George Crabtree, protégée to Inspector Murdoch. Jonny just finished his 200th show for Murdoch! Still Standing, Jonny looks for comedy in small Canadian towns. He arrives each week at a different town and after talking with various townspeople, writes a stand-up routine to celebrate the town and acknowledge its struggles and peculiarities.

“Of the 45 live minutes we tape,” says Jonny, “Only 12-15 minutes actually make it on the air. “I feel very fortunate to work on both shows, a top TV show and at the same time, do live stand up,” he says, “each earns me a lot of credibility and draw different skill sets.” 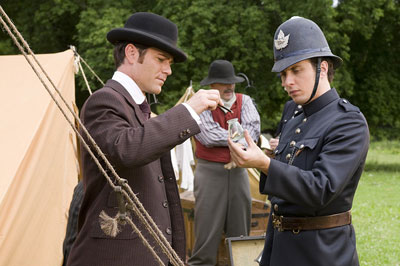 Jonny also is a firm believer in the kind of humour on Still Standing; humour that helps people laugh at themselves. The towns are chosen because they have seen better days. By immersing himself in the lives of local characters and unearthing stories in these tiny towns, Jonny’s town “stand-up routines” make everyone feel lighter.

Still Standing is a lot of work but it’s so worth it because the approach is such a breath of fresh air. It is a celebration of people who are gracious, relaxed, fun-loving and giving. People love us.” Jonny’s own comedian heroes include Jerry Seinfeld, Chris Rock, and the late Irwin Barker, Canadian comedian and comedy writer for This Hour has 22 Minutes.

These days, Jonny makes his home in Toronto East End in Riverdale area with his fiancé and 3-month-old Macey, a long-haired German Shepherd who contributed to the interview by barking in the background.

He doesn’t get back to Newfoundland as often as he’d like. There are no local food or drinks he misses, for example, “pineapple crush pop,” apparently a local staple, but he does miss the people. “St. John’s is still a ‘small’ town where you can go out and get a coffee, wander down Water Street and see people you know. There’s also a great indie music scene that I miss.“

Jonny also lets us in on a little secret: only tourists drink Screech Rum in Newfoundland and Labrador, “the real favourite is Lamb’s Rum”. When asked what the future holds, he’s pretty much content with what he’s doing now. “I’m too busy most of the time to think about other career ventures, “ he says, “although eventually I might like to move to the country and buy a piece of land.”

Jonny has appeared regularly at The Halifax Comedy Festival, The Winnipeg Comedy Festival, and on CBC Radio’s The Debaters. He has appeared as both a stand-up and sketch comic at Montreal’s Just for Laughs Festival. He has been a staff writer for the award-winning This Hour has 22 Minutes and was a contributing writer and star of Mary Walsh’s Hatching, Matching and Dispatching.

Still Standing returns the summer of 2018.