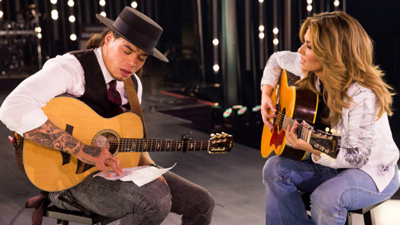 It was a life-changing moment. Just hours after “The Lucky Ones” was released, it was the No. 1 song in Canada, performed by Canadian music artist Logan Staats. The 29-year-old musician from Six Nations Reserve had become the first winner on The Launch, a new music competition show on CTV.

First aired this January, each episode of the series follows five emerging musicians working with famous mentors that compete for a chance to have a debut single released commercially.

The mentor for Staats’ group was Canadian superstar Shania Twain. Although first daunted by the thought of working with the best-selling female artist in Canadian country music history, Staats said that she quickly put him at ease. “She is one of the loveliest women I’ve ever met,” he says, “And when I was freaking out about the process and performing in front of so many people, she was my True North, keeping me focused and calm.”

Staats also was able to share common experiences with Shania about what it’s like when you feel that you don’t belong.

Staats was born in Ohsweken, Ontario, a village on the Six Nations of the Grand River reserve. He began school on the reserve, but because of his grandparents’ experience at the local residential school, his family pulled him out of the reservation school and sent him to school in Brantford.

“They had a very negative experience,” says Staats, referring to the residential school that served the Six Nations community. “By the time he’d left school, my grandfather wouldn’t even admit he was Native Canadian.” As a result, Staats missed out on knowledge about his own culture. But worse, it meant he didn’t fit in either place.

“The trouble was,” he explains, “I didn’t know where I belonged. I was seen as an outsider in my own community, but outside the community, I was still Native.”

After years of living away from Six Nations, Staats made the decision in his early twenties to return to where he was born and rediscover his roots. He had begun to make a name for himself as a singer/songwriter and spent a lot of his time working with local musicians and being part of the local cultural gatherings. 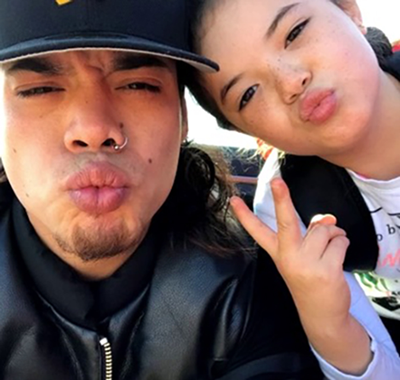 “I had to earn my stripes there, and prove myself”, he explains, “It was a struggle for both me and my community.”

Staats’ music clearly reflects the struggle of belonging, from a personal sense and from the viewpoint of Native Canadians.

Although there are no traditional drums or chanting in his music, Staats says you can hear the struggles he went through, and still goes through, in his voice. “And the history of my people and their struggle is embodied in what I do.”

When it comes to music, Staats had a sense of his voice as an “instrument” for as long as he can remember. “I used to sing when walking to and from school,” he recalls, “mostly from Disney shows, I think I thought I was Simba on the Lion King!”

His dad gave him his first guitar, and without any formal voice training or guitar lessons, Staats was writing and performing by his teens. He even admits to sneaking into bars under age (at 17) so he could have a chance to play at the open mike.

Within a few years, Staats went from local bars to bigger venues. At 26, he released his first album, Goodbye Goldia, dedicated to his grandmother, Goldie Staats. He then became front man for the funk rock band Ghost Town Orchestra. The album won him an Aboriginal People’s Choice Music Award, followed by all three of the Indigenous Aboriginal Awards available to First Nations musicians/artists.

When looking for unsigned musicians to compete on The Launch, Staats was scouted to audition. He was one of 30 artists selected by show producers from 10,000 applicants.

When describing his music, Shania wrote, “He’s so commanding…he’s a little bit mysterious. Makes you want to know him more…being captivated like that is what an audience needs…to cut through the noise.”

When the first episode aired January 10, Staats knew he’d won but he had to keep it a secret when he gathered to watch the show. The local Brantford bar was packed with people from his Six Nations community, including Chief Ava Hill. His father, his mother, and then many others started to cry with joy when the announcement was made.

At the time, he was holding his 8-year old daughter, Ryleigh, who’d been a part of the entire process. “She’s the most beautiful daughter in the world, and was a huge part of the story,” recalls Staats, “I bring her along to every show that I can. She has seen me playing in bigger and bigger environments.”

Staats is currently in Nashville working on his next album, where he is writing and collaborating with who he describes as ‘big name’ writers.

As the winner, Staat’s recoding of “The Lucky Ones”, a song written by music mogul Scott Borchetta, was immediately released to the publica. You can hear the new single on all iHeartRadio Canada platforms, and is available to buy and stream everywhere, including iHeartRadio, Apple Music, iTunes, Spotify, and Google Play.