Liona Boyd – The Migration of Canada’s Monarch of Classical Music 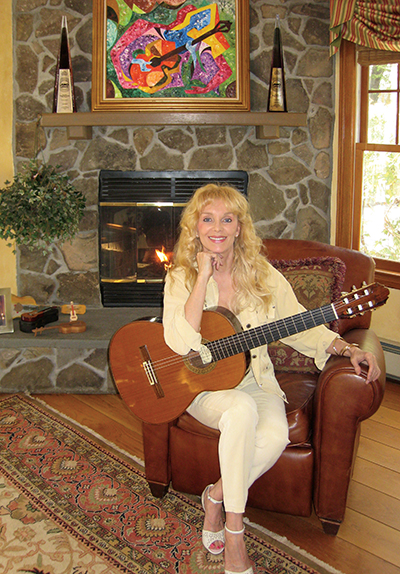 Canadians have always been enchanted with classical guitarist Liona Boyd. The many accolades she’s received include five Juno awards, the Order of Canada and the Diamond Jubilee Medal, to name a few. When perusing her many recorded albums you will find world-renowned guest artists including; Yo Yo Ma, Eric Clapton and David Gilmour of Pink Floyd.

In 1975 Liona was given the title ‘The First Lady of the Guitar’ by a Canadian magazine. After 20 years of living in the States and traveling around the world, she returns to Canada with a gift, her latest album, The Return… to Canada with Love.
Liona, the name, means ‘lioness’ in Italian. A passionate risk taker in both her music and personal life, she has always followed her heart!

At a very young age, Liona has always been the artistically talented one among friends and at school. Born in London, England, at age eight her family boarded a ship to Canada and moved to Toronto. She had her first performance in a talent show on that very ship.
Her parents were both teachers; her father taught visual arts. She naturally had a lot of support and encouragement from the family. At age 13, her life changed forever when she unwrapped a guitar at Christmas. At 14, after witnessing guitarist Julian Bream perform at Eaton’s on College Street, Liona knew she wanted to master the guitar. She took lessons from many famous guitarists and studied privately in Paris, France. Graduating with an honours degree in music from University of Toronto, she then made her New York debut at Carnegie Hall on March 22, 1975.

Her personal life, like her love of music, Liona likens herself and her career to a Monarch butterfly, transforming and migrating. 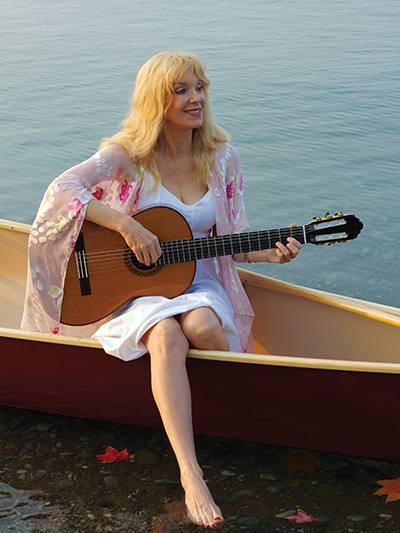 Liona is a romantic, with a deep love of nature, especially the Canadian wilderness. This evolved along with her music career.  She remembers the time she lived on Fallingbrook Drive where she could look over and see Lake Ontario through her window. With old-time friends such as Dan Hill, another Canadian music legend and all-time Beacher (still is), portaging the canoe from her house to the lake, building steps so they could get down to the water, and canoeing from there.

She has fond memories of her eight year romance with Prime Minister Pierre Trudeau and considers it “an important chapter in my life”. She often canoed with him at his country house at Harrington Lake. Later when she was living in the Beaches with her fiancee at the time Joel Bell, she was invited to be the host of a camping-canoe trip to be filmed for a World Wildlife Fund documentary. Imagining the same kind of leisurely canning she used to do with Pierre she agreed, not knowing what she was getting into. A Twin Otter dropped them off in northern Ontario for a trip paddling up the Missinaibi River to James Bay.

She brought along a guitar, thinking she might serenade as they drifted down a lazy stream. Surrounded by clouds of black flies, bundled in multiple layers to keep warm and dry, she soon realized that this was not to be the romantic getaway she’d imagined. “I’m not in any hurry to do it again.”

However, Liona remembers performing at their final destination of Moose Factory. She gave a concert there in the old Anglican church and a choir of Cree people sang for her to open the show. This experience contributed to her lifetime appreciation of the wild and natural beauty of the land and people of Canada.

In 2003, she was diagnosed with Musician’s Focal Dystonia, a condition where due to over practice involuntary muscle contractions caused one of her fingers to misbehave. She felt that “if I can’t play the guitar, my life is over.” Devastated, her condition forced her from the stage for six years.

In response, she reinvented her guitar technique, abandoned some of her ‘fast finger’ classical licks, and pursued a dream to develop her singing. Insecure about her voice from childhood, she avoided singing, even though fellow artists encouraged her. Over the next four years she recorded Liona Boyd Sings Songs of Love and Seven Journeys, Music for the Soul and the Imagination. Today Liona is happily performing again, playing guitar and singing, often with fellow guitarist-singer Michael Savona.

In 2011, Liona decided to move back to Canada to be closer to her family and friends. She has reconnected with friends in music and arts, spending time with her mother and siblings. She is also ready for a new romance. She enjoys the city and cottage country and keeps fit by walking, practicing yoga and eating healthy. A vegetarian, she admits “my favorite food is chocolate.” And of course she’ll continue to make music and brave whatever life has in store.

Over the past two years, she put her heart, soul and passion into her new album, The Return… to Canada with Love. She wants to use her songs to express her feelings and give the gift for her return to her homeland. She’s collected her memories and feelings about the beauty of Canada, translating them into words and music for generations to enjoy. Her album features guest appearances by renowned musicians and friends such as Olivia Newton-John, Dan Hill, Jann Arden, Serena Ryder and Canadian astronaut Chris Hadfield. Liona hopes the album will be a legacy for all Canadians: “a gift that will keep giving.”

Liona Boyd is very busy with her line up of performances and concerts, check out her website for details at www.lionaboyd.com. You can catch her on November 28th when she will be performing at Toronto’s Glenn Gould theatre.