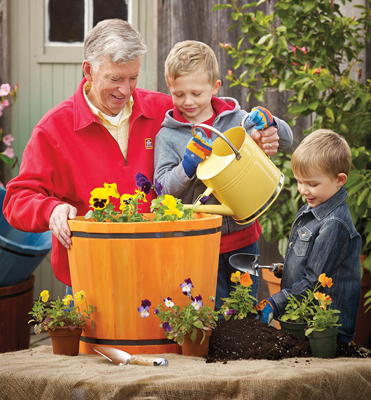 Ask Mark Cullen anything about gardening and he’ll talk about dirt!

Canada’s foremost gardening spokesman, a Toronto native with family that goes back five generations in the city, Mark Cullen knows about gardening in Toronto, and across Canada. He started working in the family business, Weall and Cullen, when he was 13 years old. The well-known Toronto gardening company was founded by his father, and one of the city’s early landscape garden businessmen, John Weall.

John Weall came to Canada from Nottingham, Great Britain after serving in WWI and then studying landscape gardening. An original Beacher, John lived upstairs at Queen East and Balsam (the northwest corner where there is now a dental office.) In 1941, John met Len Cullen, who was 16 at the time, and the two hit it off.

With over 30 years between them, “John Weall was a teacher and a mentor,” says Mark, “And my dad was like a surrogate son to him.”  Under the leadership of the two, Weall and Cullen grew successfully in Toronto’s east end for 62 years until May 2003 when Sheridan Nurseries bought the business. An Ontario botanic landmark, Cullen Gardens and Miniature Village in Whitby was founded by Mark’s father Len.

Mark advises anyone who wants a healthy garden to first of all, pay attention to soil preparation; and then compost, and mulch (in that order).

“The first step is very easy, very straightforward, and always the same,” he says, “Make sure you invest well in your soil.”

“We give it little thought because we don’t see the roots at work, but it is absolutely essential that you provide an environment that encourages healthy root development.
“I remind people that here in Canada you wouldn’t consider building a house without a foundation. In the same way, don’t consider building a garden without preparing the soil. If you have healthy roots, you’ll have a healthy plant.”

He then advises the use of compost to enhance the quality of soil, and cedar mulch to cut down the weeding and watering. For his own 10-acre garden, Mark brings in 4 truckloads of mushroom compost, and literally tons of cedar mulch, he says, “People are shocked!”

“Mulch reduces the weeding so dramatically that you’ll just save hours, so you can take that time and invest it in the things you really enjoy about gardening,” (which for most people isn’t dragging around a hose and crawling on their hands and knees pulling out weeds.)

“My goal in gardening is not to become a slave to those things you don’t like or really enjoy about it,” he adds, “and for most people, this means reducing the weeding and watering.”
By mulching and weeding in his own garden, Mark estimates that he reduces his own weeding by 90 percent and watering by 70 percent. 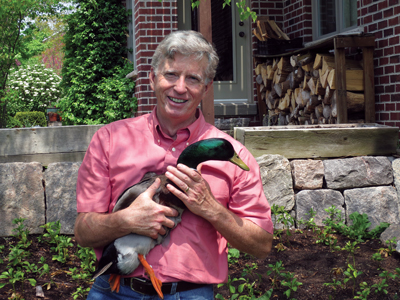 Mark now focus on various projects, including being the spokesperson for Home Hardware Lawn and Garden, hosting weekly TV segments, and writing. Over the years, he’s particularly enjoyed watching and analyzing garden trends across the country.
For example, Mark has seen the focus in Canadian gardening shift dramatically over the past 20 years, away from what he calls a “formal sanitized approach” to a more natural approach. “The younger 20-30 year-old generation has taught us to throw away the rule book,” he says, “There no longer are expectations of what one should grow, or where you have to place your plants.” As a result, perennials can be planted with annuals, rose bushes don’t have to stay in a dedicated rose garden, and one of the biggest broken rules, flowers are mixed together with vegetables.

In fact, when you ask Mark whether he prefers vegetables or flowers he simply states, “I can’t answer that. That’s like asking me which child I love best!”

But he does have his favourite plants; for example, this season one of his top annuals is Rainbow Mix Swiss Chard. The seed packet produce plants that range in “hot” rainbow colours, red, yellow, pink, cream. They are easy to grow, and best of all, you can both admire them as ornamentals, or eat them!

Mark has also watched with enthusiasm the growing interest in the environment, the popularity of Native plants, and the concept of garden-connectedness. “A generation ago,” he explains, “We thought that by having a fence or a sharply pruned head hedge we had our own space. But now we know that your garden and your neighbours’ garden are connected with the larger green spaces in the urban environment. The activity in your garden, including the wildlife that visit your garden, is influenced by Lake Ontario, the beach itself, public spaces, and the gardens on your own street.”

Certainly more and more people are gardening today, and those who already garden, are gardening even more. Mark sees this as a wonderful trend. “There’s only an upside to it,” he says. “The more people who garden the better place Canada is a place to live, and we become better people for it.

Mark lives in his environmentally friendly dream home where he enjoys his 10 acre garden: an acre for vegetables, 50 trees, 3 meadows as well as a garden close to the house so he can sit outside in the good weather and work on his computer.  His latest project has been completing his new book, The New Canadian Garden, published by Dundurn Press here in Toronto.

Mark invites you to sign up for his free newsletter at markcullen.com