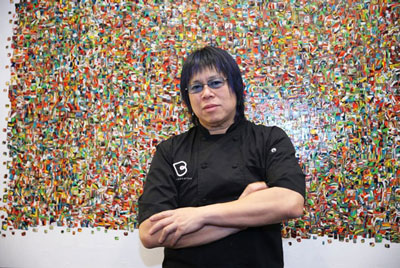 We all know him as the blue-haired chef who yells a lot and calls himself the “demon chef”. But the term “demon” may not be what you might think. “Demons are playful,” Alvin explains, “They are mischievous, they like to create and surprise people, you know, have some fun!”

It’s the element of fun and play that has characterized Alvin’s cooking since he first decided to become a chef over 15 years ago. To this day, Alvin embraces a sense of play and humour as his philosophy to face life’s challenges.

“People need to have fun,” he says, “Especially these days when everyone is trying to do and say the right thing.”

As for the “yelling”, it’s all part of what’s made him a top chef.

“I love to create,” he says, “I love to make food. I love to boss people around. Sure, I yell, it’s very common in a kitchen were people are working together and everyone is trying to do their best. It’s just that most of us are perfectionists, and when things aren’t going perfectly, there is going to be some emotional exchanges. But nothing is kept ‘overnight’.”

He adds that there is a lot of yelling at hockey games and construction sites as well!

Alvin has just finished another successful season of MasterChef Canada, where he joined Michael Bonacini and  in judging twelve home cooks for the top prize of $100,000 and the life-changing title, MasterChef Canada.

Born in Britain, Alvin moved to Hong Kong with his parents as an infant, and then in the 1960s, the family emigrated to Canada where his father was attending the University of Toronto. Alvin quickly began to absorb Toronto’s culture, and became a life-long Toronto Maple Leaf fan. After all, he says, he saw the last game when the Maple Leafs won the Stanley Cup in 1967. He even suggests that perhaps that is the reason he dyes his hair blue!

Alvin attended L’Amoreaux Collegiate in Scarborough, and then graduated with a degree in acoustical engineering from the University of Toronto. But after working as an engineer for many years, his life took a sharp turn! He recalled how much he enjoyed working as a busboy at a restaurant one 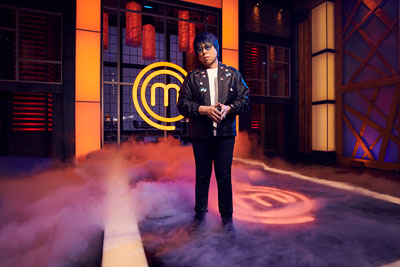 summer, when he was sixteen. “That’s when I decided cooking was much more practical than engineering,” he quips. So he set out to become a chef. (Photo Credit: Courtesy of CTV)

Cooking came naturally to him, and with a personality that’s not afraid of making mistakes, he set out to learn the industry. In 2003, the self-taught chef had taken over a struggling restaurant in Hong Kong called Bo Innovation, which had been run by a friend of his. His creative dishes soon began to catch the attention of food lovers and critics alike. He began referring to his fusion dishes as “X-treme Chinese.” By 2009, Bo had been awarded two Michelin Stars, a huge triumph for Leung.

Alvin credits his road to success to learning and observing along the way, and not being afraid to make mistakes. “There are days when things aren’t going well, but overcoming challenges has always brought me satisfaction,” he says. “At the end of the day, I’m a pretty lucky guy, I don’t complain about life and I’m very happy with what I’m doing.”

One challenge Alvin faced a few years ago was a diagnosis of Type 2 Diabetes. He manages his diabetes with exercise, and watching his blood sugar levels. “It’s not the end of the world,” he says, “and that’s how others need to think about it.” He then reminds us of the high percentage of people who have Diabetes, a condition expected to expand over the next decade because of the aging population.

Today, Chef Alvin Leung refers to himself as a true “Scarborough boy” and proud of it, even though he’s quite the world traveller these days. He currently lives in Hong Kong but with a thriving restaurant in Toronto and his successful show on CTV, he frequents Toronto and has a residence here. He and his wife Abby have a daughter, who works as an architect. He also has TV appearances and operates restaurants on two other continents (Singapore, Shanghai, Hong Kong, UK).

Five years ago, Alvin joined the judging panel of MasterChef Canada. When the first-ever season was over and done with, the winner Eric Chong joined forces with Alvin Leung and they opened R&D, a modern Canadian-Asian restaurant in the heart of Chinatown. “R&D” aptly stands for “rebel and demon”!

As for future goals, Alvin has a philosophy about planning for the future. “I don’t think about it too much, instead I take each day at a time. I have dreams, and continue to have dreams. But goals mean you’ve stopped. I don’t intend to stop!”

Season 5 of MasterChef Canada returned this April to CTV, and airs Tuesdays at 9 p.m. ET on CTV.