Out There, Right Here with Melissa DiMarco 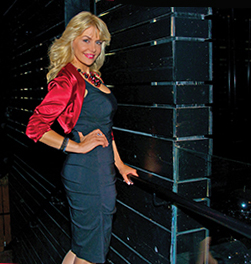 The show mixes celebrity interviews with scripted comedy that takes a behind-the-scenes look at her life. It means she can interview celebrities like Brad Pitt and George Clooney, but let herself be part of the story, which in many instances, ends up as great comedy. In Melissa’s words, “the show has become a vehicle for my life’s adventures”, taking her to places like the Cannes Film festival, where she inadvertently forgot to read the fine print and found herself scrambling to find the proper dress!

Melissa grew up in Toronto and after graduating from York University with a degree in Fine Arts decided to “follow her heart” and pursue acting and producing. Now with many film and television credits under her belt including award winning performances and direction, she describes what she does as the perfect fit of “right and left brain”. 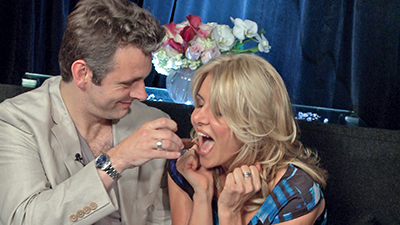 She’s both an actress, known for roles including Ms. H. on the New Degrassi, a role she held for 9 years, and a producer and executive producer, where she negotiates contracts, meets with the network, forges deals, sets budgets and manages schedules. Her film credits include a leading role in The Pete Rose Story. Her television credits include a starring role in Riverdale and guest-starring spots on series such as Due South, The Hardy Boys, Psi Factor, Relic Hunter, and Kojak. She has also interviewed A-List celebrities at international film festival venues.

“My work really is my life,” she says, “but my work is also what I love to do. So what you see, when I’m enjoying myself and sharing with my audience, is exactly who I am.”

The Out There Entertainment production office has recently relocated to the Beaches. All post production work and administration is carried out at the new location. Some of the shooting for Melissa’s show is done in various neighbourhood spots.

“We specifically chose the Beaches,” she explains, “because there is a very creative environment here, and it’s a more serene environment for our crazy, busy world of entertainment.” For Melissa, it also means that in one of her few spare moments, she can fit in a quiet walk by the lake, or a time to think up new story ideas at a local café.

A behind the scenes look at Melissa reveals a bit more about her life and of growing up with strong Italian family values of hard work, loyalty and family. “These are the values I still function on.” She involves her family in her show, including her grandmother, and her mother has been known to show up at the studio with her special spicy chicken wings.

Although not a cook like her mother or grandmother, Melissa makes a good shrimp pasta, a trout dish and soup, “Hey, I’m a pretty good cook!” she declares. She also loves nothing better than turkey with stuffing for Thanksgiving, something that she didn’t get to have growing up (her family still insists on serving traditional beef, veal and lasagna instead!)

Melissa also has an interesting hobby,  making her own perfume, blended with oils and plants she grows herself. “I’ve been making my own perfume since I was 14,” she explains, “from natural ingredients, grown in my garden.”

At Christmas time, Melissa has some traditions of her own including putting up a “Charlie Brown tree”, slightly bent over with the weight of various decorations collected from her travels around the world.

As the year closes, she is optimistic about the future. Out There Productions Company is expanding, with new products in film, television and social media being added. It’s a real triumph for the entertainment business in Canada and further proof that Melissa DiMarco continues to be “out there” as one of our favourite on and off screen television and film producer/actor/journalist/host!

Catch new episodes of Out There with Melissa DiMarco, tune into Citytv on Saturdays at 7:30 pm.