For many, Arlene Dickinson is a celebrity, best known as the only female dragon, a venture capitalist on CBC’s Dragons’ Den, now in its sixth season.

With an estimated net worth of $80 million, and a packed life as one of Canada’s leading businesswomen, top CEO, self-made millionaire, author, entertainment personality, mother and grandmother, one would wonder if Arlene Dickinson has any “down time”.

“I’ve been very lucky through my life in my ability to compartmentalize,” Arlene explains, “I’m very good at shutting it off, decompressing, separating out my business and personal life.” Arlene loves to read, listen to music and enjoys long walks around her property outside Toronto. She also loves to walk in downtown Toronto in the entertainment district, taking in the urban streetscape.

Born in South Africa, Arlene came to Canada with her parents when she was a child and grew up in Alberta. She faced various obstacles, including a divorce at 28, with four children under the age of 10. But with an innate talent for marketing combined with hard work and determination, she and a partner co-founded Venture Communications in 1988. A decade later, she became the sole owner, and has since grown Venture into one of Canada’s top independent marketing  frms.

A recurring message in Arlene’s approach to business is that you don’t have to be cutthroat in order to be successful.

“You have to be able to make strong decisions,” she says, “But you don’t have to be ruthless or get things done in an unethical or cruel way.” In short nice guys and gals can  fnish  first.

That is how she sees business today. “Younger entrepreneurs believe that you have to have room in your heart when you’re making decisions,” Arlene explains. When asked if the different approach has anything to do with more women in senior positions, Arlene agrees to a point.

“Women have had a lot of in uence over what has happened, but so has the next generation of business owners. There’s a newer kind of business thinking that includes how to make the world a better place.”

It’s all connected to Arlene’s interpretation of the art of “persuasion,” a belief that success in business comes from listening to others, from emotional connection and reciprocity.  This approach is the message of her book, PERSUASION – A New Approach to Changing Minds. The book has been described as a how-to manual for gaining success in advertising and business.

At the same time, she launched the book with a series of products. This March, Arlene debuted, The Big Decision, a fourepisode series featuring her and Jim Reliving, one of her co- Dragons.  The show is about saving existing Canadian businesses in need of expert advice and cash injections. 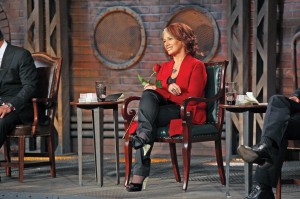 Arlene explains, “ the show really helps people understand what goes on behind the scenes in a business.  ere are certain choices you make that have fatal consequences, and others you can recover from.” The show demonstrates to viewers that being in business is tough and business owners aren’t alone in their struggles.

Arlene Dickinson’s accomplishments have been recognized with a number of honours and awards: PROFIT and Chatelaine magazine’s TOP 100 Women Business Owners; the Pinnacle Award for Entrepreneurial Excellence; Global Television Woman of Vision; and Canada’s Most Powerful Women Top 100. Venture was also recognized as one of the 50 Best Managed Companies in Canada for three consecutive years.

She also lends her time, skills and leadership to benefit the industry and community, and serves as a volunteer on numerous boards.

She divides her time between a home in Calgary and in Toronto.