Scott McGillivray has the Midas touch for turning properties to gold!

Most people know Scott as the host of HGTV’s hit television show, “Income Property”. In this unique show, Scott educates viewers how to turn their residences into income generating properties through renovating, renting and market appreciation. Scott recently finished taping season seven of the show with new episodes airing January 2013. The show has become so popular that each month over 1,000 people apply to be one of the featured owners.

Born and raised in Toronto, he found himself studying commerce at the University of Guelph. What started as a project at university soon became an opportunity for Scott McGillivray to buy and renovate his own rental property at age 21. By the age of 25, Scott found himself the owner of 25 income properties.

Although delighted that he reaches so many people, Scott advises, “Income property investment is not for everyone. You have to get ‘thick skin’ to get into the business, that is to be prepared, organized and self-motivated because you are really working for yourself. And finally—and most importantly—you have to remember that you are renovating with a purpose.” 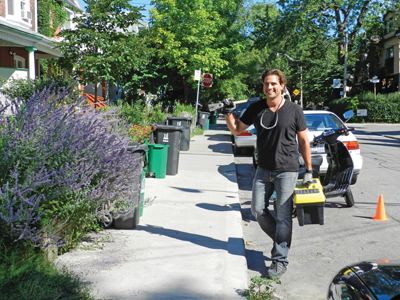 This message is at the heart of what Scott and his show is all about. He encourages and teaches a long-term approach to income property investment. This includes making sure that the renovations and decorating you under take hold up over time. You also have to strike a balance between functionality and looks when creating your rental in order to create cash flow.

“The caliber of your space dictates the caliber of your tenants,” Scott believes. “Unlike house flipping, income property is a long-term investment. A good renovated property holds up to the wear and tear of living so that you’re not constantly having to inject new money.” Scott currently owns over 100 properties; some were renovated over 15 years ago, have gone through over 10 different tenants, and are still in good condition and show well.

Scott is very familiar with the older houses found in the Beaches, Leslieville and Riverdale areas. He estimates that he’s probably done 100 houses in that area alone. He encourages our readers to apply to be on the show.
Although life is fast-paced these days, Scott is continually inspired by the people he meets, and in return, he inspires others. Often people will come up to him and say, “Hi Scott, I have a rental property because of you”. This always makes him feel like he’s making a difference. Scott is now expanding into vacation rental properties in places such as Florida and California ,“I keep doing this”, he adds, “because it’s what I know and I like it.”

To help even more people, Scott has co-authored two books on property investment with fellow real estate investor, Michael Sarracini. “The Investor’s Tool Kit” is for beginner investors, and “Income for Life” is for the those who wish to make this a career.

On top of all this, Scott is a family man, married with a new seven-month old daughter. Along with his busy schedule of writing, managing his business and taping television shows in Canada and the US, Scott enjoys barbequing and being known as the breakfast specialist. When he travels, his family goes with him.

To learn more about Scott, his books and television show, visit scottmcgillivray.com