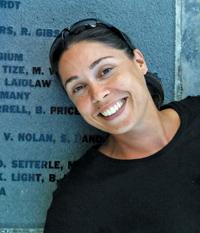 By the time this story is published, local athlete Victoria Nolan, will be training in Portugal en route to the 2012 Paralympics Games in London, England.

No stranger to winning, Victoria and her crew won bronze, silver and gold medals at the World Rowing Championships and came sixth at the 2008 Paralympic Games in Beijing. She and her team broke the world record in their racing class for Canada in New Zealand in 2010.

Growing up, Victoria always remembers wanting to be a teacher and really had no interest in sports. Now at age 37, she is a public school teacher in Toronto and also a member of Canada’s national Paralympic rowing team – and did we mention she is almost totally blind?

Victoria started to lose her sight at an early age. She was diagnosed with retinitis pigmentosa at 18, an eye disease that starts with night blindness, followed by a progressive narrowing of vision. Her condition worsened after the birth of her second child, which caused her depression. She took up rowing to “regain my independence” and became a member of the Argonaut Rowing Club, one of Canada’s oldest and most reputable clubs.

Although Victoria’s team has been in place since 2010, like any team, rowers have to work together to be successful.

“Being blind may give me an advantage,” she says, “I’ve had to learn to trust others and rely on them quite a bit—something that is very important for any team sport.” 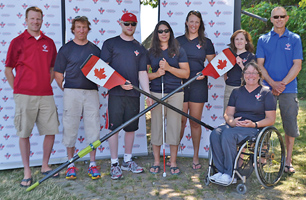 She is one of four team members in the boat, plus a coxswain—an able-bodied person who calls the pace and directs the steering. The only difference between her boat and the team, compared to that in the able-bodied Olympics, is the mix of two men and two women.

“Everything else is the same,” she adds, referring to the thin, racing shells used in Olympic rowing competition.

Each team member has a disability, but only one, other than Victoria, is vision impaired. Victoria’s position is at the bow (the back) of the boat, although this might change once final training begins.

Victoria began intensive training with her rowing team earlier this summer in St. Catherines, Ontario, where her name is engraved on a sidewalk beside a statue commemorating rowers in Port Dalhousie. Five days before the Paralympics begin, she’ll travel to the UK, then stay for the duration, August 29 to September 10. Although she was born in Liverpool, in the UK, she’s only been back a few times.

“Ultimately, we’d like a gold medal,” says Victoria, thinking ahead to the day of her race, “but most of all,” she adds, “we’d like to know that we executed our race plan and did our best. The worst feeling in the world would be to think that you hadn’t done the most you could do.”

During competition, Victoria will be cheered on by her husband, children ages 7 and 9, parents, sister, aunts, uncles and of course her guide dog Vegas (who doesn’t even like the water).

“Simple messages really matter,” says Victoria, “It’s amazing the strength you get just knowing that others are behind you.”