Sons of Beaches Good Music for a Good Cause 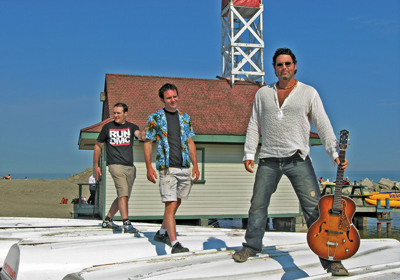 Sons of Beaches grew up locally and attended Malvern, Neil McNeil and Danforth Tech schools. Brothers Frank and Patrick were both bitten by the  musical bug at an early age. Although they were both active in music–Frank  singing in rock bands since the mid-80s and his brother Patrick playing piano–they never really performed together.
Mike came from a history of singers, son of Harry Harding, a successful doo-wop vocalist in the 50s and 60s.  Mike started singing at his school’s talent shows.

In the early 1990s, Parks and Recreation planned an event at Kew Gardens Park for the camp and playground kids. Since Frank, Patrick and Mike worked at local recreation centres, they decided to get together to do a little staff performance for fun. They all sang lead vocals, Frank played guitar, Patrick on keyboards, and Mike turned an upside down garbage bin into a drum.

Franks remembers how the band was formed and got its name, “We started to rehearse in the Beaches Recreation Centre change room and noticed how well our three-part harmony blended, especially to the songs from the 50s and 60s. There, the Sons of Beaches was born.”

After the Kew Gardens’ camp show, the band started to do special events and fundraisers in the area. They have performed at hundreds of weddings and dances and eventually started hosting jam nights in local bars.

When the band is not performing, Frank and Patrick work full-time running  the Beaches Recreation Centre and Oakridge Community Centre.  Mike is a full time disc jockey performing in clubs and for business functions.

Frank continues to tour with several bands around the Toronto area and he hosts a weekly jam session at Fitzgeralds pub. Patrick has recorded a full CD and does an incredible Billy Joel tribute show.

Sons of Beaches has not forgotten how they got started. “Almost 20 years later we still get together for small local school fundraisers, community events and street festivals. We also play large annual events like  the Canada Day celebration in Thompson Park. Anything that needs good music for a good cause,” Frank tells us.

PS–if you haven’t figured it out already, Frank and Patrick are the sons of Gene Domagala, well known local historian.

Sons of Beaches will be playing at “Let’s Beach”, summer celebration event at the Balmy Beach Clubhouse on Sunday, July 12 from 1-6 pm.