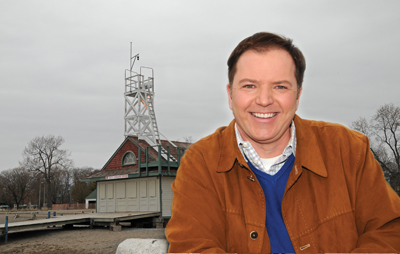 Back in the early ‘80s, when vinyl records were the king, Tom Brown the broadcaster was born – only he didn’t know it yet. Tom, who grew up on the Firstbrook Road in the Beaches, attended the same Malvern High School as many other celebrities and famous people did. Wanting to fit in with the cool crowd, Tom got his first job at Coca Cola so he could purchase a Harris tweed jacket to wear at school.

Tom’s 26 year broadcasting career started as a member of Radio Club at Malvern. Arriving an hour before everyone else, it was at these 8am sessions he was bitten by the broadcasting bug. During this morning show, he was busy with DJing AC/DC records and making school announcements. He might not have started out as the smooth talker that he is now, but in no time, his natural “on-air talent” came through. During the eleventh grade Roger’s Cable was looking for a host for a new show called High School Time Thursday Night at 8 pm, Tom and his larger-than-life personality were the perfect fit.

Back then, if you told him that his hobby would transform into a 26 year career, he would have told you to get out of town. And that’s just what he and good friend Andrew Francis did. The pair enrolled at Fanshawe College in London, Ontario in grade thirteen. At the time, Tom had two choices: to be a broadcaster or a police officer.  Tom’s passion for broadcasting was a clear choice, and since then he has never looked back.

When you see Tom in front of the weather map, not only can he tell you about the weather, he can also tell you what it is like to live in many of those places. Nine days after graduating from Fanshawe, he packed up his belongings and took his first radio broadcasting job in Regina. Tom’s voice has since been heard on the radio throughout Canada.

Tom stumbled into television by filling in for a weather anchor at Global Television Regina, where his wife Shelly was working at the time. It didn’t take long for his personality to land him an anchor position on television.

In spite of all his adventures living across Canada, Tom has always considered the Beaches his home. Even in his former home in the Prairies, a print of Randall’s hung
over his couch. For him there was always a need to return to the Beaches. “The way I see it, there is no stress here, the beach has a calming effect to which everything comes together.”

Six years ago, Tom and his family moved back to Toronto to join CTV News where he got the opportunity to work with Dave Duval. Since David retired in 2009, Tom has stepped into those big shoes, but tailored it to his own style.

He has fond memories of the goodwill of the Beaches community.  At the age of nine, his family home burned down due to a grease fire. In order to not disrupt their schooling, he and his sister were taken in by two neighbors while their house was being rebuilt.
He is very grateful for the kindness his Beaches family showed him.

He treasured this childhood experience and believes it was where he developed his strong interest in philanthropy.

What we see on television is only 20% of his work, the other 80% of his time is spent in the community, at charity events and especially meeting people with special needs. Over the years, Tom Brown has been involved with numerous charities including Sick Kids, Variety Village and the Canadian Cancer Society.

This high-energy broadcaster is a champion of those who are often treated as if they were invisible. He wants to take his celebrity and shine the spotlight on others. He feels that others give back to him just as much as he gives to them.

As he always tells others, “Say it out loud, say it proud and it will happen.”