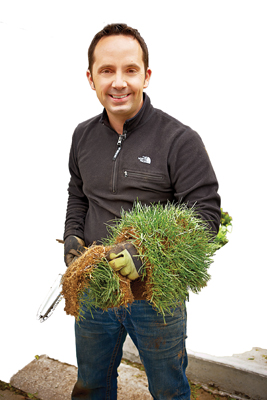 For many of you Frank Ferragine is a familiar face, even if his name is not. You may know him better as Frankie Flowers, the zany gardening guru/weather guy who has been sharing his expert gardening tips with viewers on Citytv’s Breakfast Television for the past seven years. Frankie’s passion for plants has its roots in his childhood, as does his nickname. His family immigrated to Canada in the late 1950s from southern Italy after also having spent several years in England. Once in Canada, they applied their gardening skills to growing vegetables on a 20 acre farm in the Holland Marsh. Later, the family started one of the country’s largest gardening centers, Bradford Greenhouses, which they still run today. As for the nickname, Frankie’s boyhood friends had trouble pronouncing his last name so they just started calling him Frankie Flowers and it stuck.

Frankie grew up playing in the greenhouse and helping out in the family business from the moment he could walk and talk. “Childhood labour”, he jokingly called it, but obviously it was a labour of love that has become his life’s work. While at one point he did leave the gardening business to study law at York University, he soon returned to working with plants; now he is passing on his love of gardening to his own two young sons. At the ages of two and four, the boys already have their own little gardens and enjoy harvesting, cooking and eating the veggies they’ve grown themselves.

Over the years Frankie has taken horticulture courses at places like Humber College and the University of Guelph. However, most of his knowledge comes from his experience in the family business, as well as through what he is continually learning from his own gardens and from talking and listening to other gardeners. Frankie’s wealth of knowledge and the practical and yet humourous way in which he is able to convey it to others has made him one of the most popular and sought-after gardening experts in the country.
Throughout our conversation, Frankie offered many helpful hints for a better gardening experience.

“Plant what you eat” – bringing things from the garden to your table always makes you appreciate your gardening work more. “Don’t be afraid to plant your vegetables amongst your flowers” – a veggie flower combo garden can look “cool and sexy”. Mixing coloured vegetables like purple cauliflower, red cabbage, and eggplant with edible flowers like nasturtiums will only add to your garden’s good looks. For Beachers, who live on mostly sandy soil Frankie had two suggestions: either grow native plants which suit the sandy soil or replace your garden soil with a triple mix, in raised beds or containers.

In addition to his daily spot on BT, Frankie also appears regularly on CityLine and CityNews, writes numerous gardening advice columns, and has recently written a comprehensive new gardening book called “Get Growing”. The book, written in clear, concise language, complete with checklists and photos, is designed to make even beginner gardeners feel confident.

Frankie Flowers seems to be on a mission to make gardening easy and fun for everyone. Don’t worry about making mistakes he tells us: “I kill plants every year – some plants just don’t work out. It doesn’t have to be the perfect garden just so long as you like it”. So relax, and just get out there in the garden and get growing! 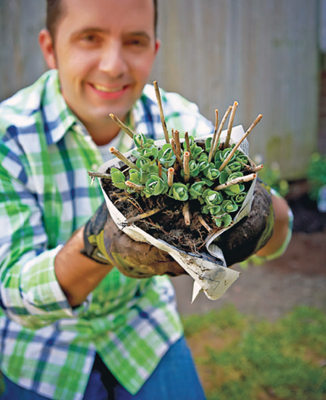 Early spring is the ideal time to prepare a vegetable garden. Growing your own vegetables has many rewards, but it takes a lot more effort than hitting the produce section at the grocery store. If you’re a novice, don’t let your stomach do the planning because it’s your back that will end up doing the work!

Many people are too ambitious when they plant a vegetable garden. The bigger the garden, the more weeding, watering, and harvesting  you’ll be doing. Even a small vegetable garden can provide a bounty: by harvesting, replanting, and rotating your plants, a space as small as 1.5 square metres (16 square feet) can feed one person for an entire season. One zucchini plant can make a lot of zucchini loaf, and a single tomato plant grown under the right conditions will produce enough tomatoes to keep a family of four happy.

Early-spring vegetable garden,  check list and all photos are from “Get Growing” by Frankie Flowers, Harper Collins Canada. Available wherever books are sold.