The Water Brothers – from Neville Park to Mount Kilimanjaro 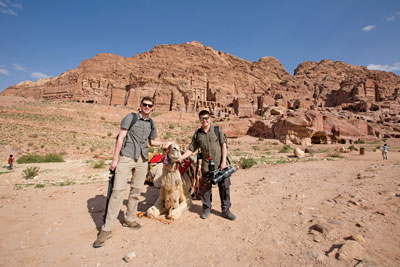 Born and raised right here in the Beaches, Alex and Tyler Mifflin have quickly become international ambassadors for water issues around the world, starting right here with our own Lake Ontario. With three seasons of television shows behind them, international recognition from eco experts like David Suzuki, a season ahead in the works, and plans to reach more people in more countries around the world, there seems no stopping their passion. In Tyler’s words, “there certainly isn’t any danger that we’ll run out of ideas!”

Growing up on Neville Park Avenue within sight of Lake Ontario, Alex and Tyler Mifflin remember being told when young “not to go swimming in the lake because it was polluted.”

The experience played a role in nurturing their life-long love affair with water. Both learned to appreciate water, especially when swimming and canoeing at their family cottage and at summer camp. But they also learned early on about the serious nature of water issues, wherever you live.

Fast forward to their mid twenties, Tyler a graduate of the University of British Columbia with a major in film production and Alex with a degree in International Development and Environmental Studies from Dalhousie University. Both found themselves working on an IMAX documentary on sustainability at their family’s film company, SK Films.

“We realized that water was the central element in all our story ideas,” explains Al. “The choice then seemed obvious. We would focus on water-related environmental issues.”

The one film expanded into a series, The Water Brothers, an eco-adventure documentary that explores and uncovers the important water stories around the world. The show’s third season launches this April on TVO and online. The brothers are busy planning season four.

“We didn’t get into this because we wanted to be on TV,” says Tyler, “we really wanted to raise awareness and educate others about water issues.”

Today, being The Water Brothers is pretty much a 24/7 job. Alex (27) is the lead researcher, co-writer and co-host. Tyler (29) is the co-host, director, videographer and co-producer. But in reality, both work together on all aspects of the show as well as the education and awareness that go with it.

“We plan the episodes, write the scripts, host, shoot, edit, work on marketing and promos”, says Tyler. In addition, both engage in various initiatives to raise awareness beyond the show including speaking engagements to schools. In the fall of 2012 both scaled Mt. Kilimanjaro – Africa’s highest peak – to raise funds to combat the global water and sanitation crisis. 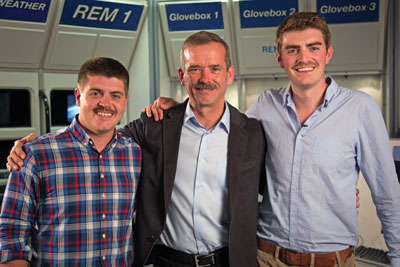 Tyler (left) and Al with Astronaut Chris Hadfield during Movember

Over the past three years, Al and Tyler have visited over 30 countries on almost every continent to find fascinating stories about local water issues. Their visit to India last fall, for example, told the story of The Ganges, a river considered a goddess by Hindus, but one that is slowly dying because of waste entering the river. Another took them to the Great Pacific Garbage Patch, a collection of marine debris in the North Pacific Ocean where trash such as North American water bottles collects on the ocean floor.

“Everywhere we’ve gone,” says Tyler, “people have a spiritual and cultural connection to water, and a profound respect for it. But there are not always the best practices in place to protect it.”

In Canada, the issue we face is what Tyler describes as our “myth of abundance”. “Out of the incredible gift of having too much water, we’re also one of the largest users of water in the world.”

The brothers are keen to share their knowledge through their mobile app, “QUENCH”, that connects you to water fountains and official water bottle refill locations across the GTA as well as various environmental teaching guides. Both these can be found on their website.

Both Tyler and Al attended Balmy Beach and Courcelette public schools. Alex attended Malvern; Tyler went to Metro Toronto Prep. They are big sports fans and participants. Each cheer on the Blue Jays and Raptors, and love to spend free time at the cottage in the summer. They still live on Neville Park Drive.

“Home,” laughs Tyler, “We’re on the road 4-6 months of the year so we are both just happy to be home when we can.”

And their favourite water-based drink? Aside from water itself (always from the tap!) coffee and beer make it on the list. “Coffee is pretty essential in our business,” says Al.