Top of her Game – Chef Crawford Just Keeps on “Pitchin’ In” 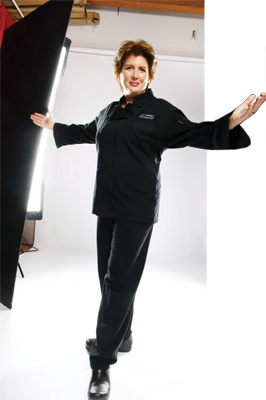 With 24 years of culinary experience working in top restaurants across North America and as Executive Chef at the Four Seasons in Toronto and in New York City, Lynn Crawford has earned her title, “Canada’s Top Female Chef ”. Lynn has become a household name because of her show“Pitchin’ In” on the Food Network, where she travels all over North America to source out great products. In2005-2008, she was one of the rotating chefs on the television show, “Restaurant Makeover”. She battled against Bobby Flay on “Iron Chef America 2007”. Lynn has also appeared with many well-known celebrity chefs, including Gordon Ramsay. And this past November, she kicked off the Royal Winter Fair with the Annual Celebrity Chef Competition.

Growing up, both of Lynn’s parents were good “home” cooks; her father was a butcher in Scotland. While Lynn was a student at Guelph University she began shopping at the local farmers market and cooking for her friends in the hospitality program. It’s that hospitality that inspired her to start her professional journey – and the rest is the history…She discovered early on that “there was only so much I could learn behind a stove,” so she began reading anything she could get her hands on about cooking -where to find quality ingredients and how to cook them properly and finding out about the best chefs and top restaurants in Canada, North America, Europe and around the world.

“Ultimately, I just care about the experience I provide my guests and want to give them my best. I just always wanted to be the best,” she says. But this doesn’t mean she wants complicated food. Lynn has a passion for quality ingredients and her menus are inspired by produce that is in season and grown by local farmers. She also wants to know where any food she uses comes from and how it was made.

Her show “Pitchin’ In” is not only educational to viewers about how each ingredient is farmed, it has added more passion to Lynn’s cooking – she now strives even more to extract the best of each ingredient she uses in her menu. Chef Crawford has made it a priority to have positive relationships with local farmers and growers and has built an appreciation for the difference that fresh makes and incorporates these values into her kitchen. Lynn attended George Brown College in Toronto, one of Canada’s finest culinary schools.

When Lynn started her career as a chef over 20 years ago, she encountered the attitude that “women don’t belong in a kitchen”(at least, a restaurant kitchen). But overcoming obstacles isn’t an idea that’s new to Lynn. “I love a good challenge,” she declares. After 23 years at the Four Seasons Hotel in Toronto, Montreal, Vancouver and New York she felt that she had grown up and was ready to start a new culinary journey. 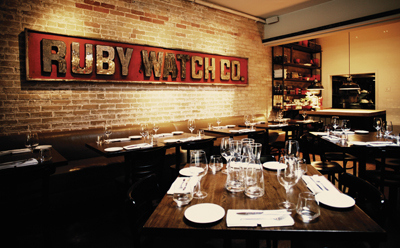 “It’s just the life I lead,” she explains, after almost two years of running a successful restaurant, Ruby Watchco (with two partners) in Toronto’s east end. “I thrive on working weekends and holidays, with no set schedule. … I’m surrounded by talented people who make the challenges manageable and everyday I’m able to inspire others to cook and enjoy a wonderful meal together.”

Looking for a suggestion for a holiday meal with friends and family? Lynn recommends that you either make a one-pot dish, as simple as lasagna, pork roast, or charcuterie or let your guests participate in a pot luck meal. Holiday entertaining shouldn’t be stressful, she says. “It should be about sharing a meal and celebrating”.

Lynn has a book coming out this January inspired by her show – “Pitchin’ In”, by Penguin Publishing. Watch Pitchin’ In on the Food Network foodnetwork.ca