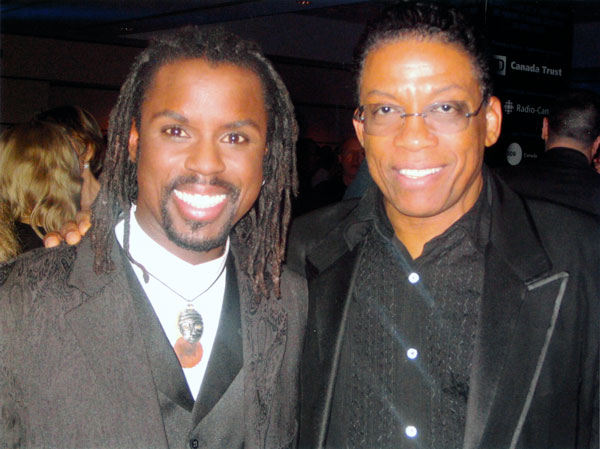 Arts and entertainment reviews describe Andrew Craig as a true Toronto-born Renaissance Man—it’s no wonder! Andrew does it all. He is a multi-instrumentalist, a vocalist, producer, director, composer, playwright, film/video producer, broadcaster and impresario. He works in multiple musical genres, and collaborates with artists in other disciplines.

His career includes many accolades. He was the musical director for high-profile tributes to Quincy Jones and Oscar Peterson, as well as York University’s 50th Anniversary Concert. He’s arranged music for 50,000 children singing for Nelson Mandela. He’s shared the stage and the studio with some of the most acclaimed names in music: from Wynton Marsalis to Herbie Hancock, and Molly Johnson.

Andrew describes himself “as about as non-conformist as they come.” From performing his annual Gospel Christmas Celebration at Massey Hall, to putting on the “Titans of Toronto Reggae” concert at the Opera House this past winter with 16 local artists. Producer of the performance of ten pianos and orchestra that debuted at a countdown event for the Toronto 2015 Pan/ParaPan-Am Games, and former CBC Radio 2 host for a broad range of music from jazz, blues, pop and world.

To be precise, Andrew is as familiar with and appreciative of classical composers like Bach and Beethoven as he is of jazz greats like Miles Davis and Ella Fitzgerald, soul artists like Wilson Pickett, pop artists, emerging world music performers, and every new musical format and emerging artist he comes across.

Growing up in Toronto, Andrew enjoyed an education that was very different from his parent’s roots in Guyana. His mother, an immigrant and a single parent by the time Andrew was in public school, could see that her young son was suffering in school. “I was bullied,” said Andrew, “ and my mother knew that she had to do something or it would not turn out well for me.” 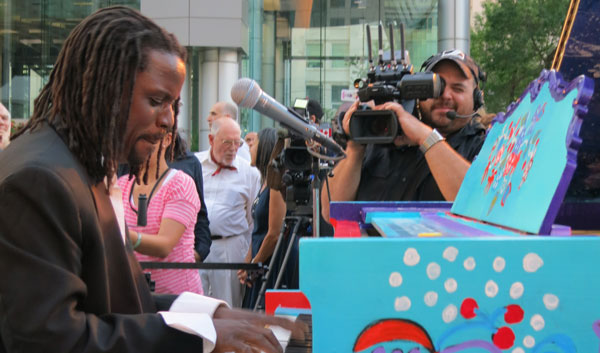 Even though his mother could not afford a private education for her son, she sought out a school that had a reputation for high academic achievement and a strict code of discipline. As a result, Andrew was enrolled at the St. Michael’s Choir School, where he stayed until he graduated in grade 13.

Not only did Andrew hone his musical talent in singing at St. Michael’s, he also studied piano. When it came time to assign an instrument, he was given the pipe organ. So as a teenager, Andrew was the organist at a local church!

Andrew says his mother, now in her eighties, is “still going strong. She made quite the extraordinary sacrifice,” he says, noting that she even had to take on a second job to pay the annual tuition, which meant working 14 hours a day.

The steady diet of classical, Christian music, founded in the Western European tradition was only one side of Andrew’s music education. The young boy grew up with a mother who surrounded herself, and her son, with all forms of other kinds of music, including, of course, the jazz and soul greats.

“I can still picture my mother sitting on our living room floor on the shag rug”, recalls Andrew. “Surrounded by her records, listening to her music – jazz, musicals, Broadway musicals, soul, country. As a result of her eclectic taste, I learned to love it all.”

“I had a dual musical education, white music at school and black music at home”, he laughs. “It helped me develop my diverse taste in music. It also meant that I knew by 15 that I wanted to pursue music as my lifelong vocation.” Andrew also knew that despite his formal music education, he was anything but a musician that was going to stay with one format of musical genre.

After he graduated from high school, Andrew entered the music program at York University, a program known for its diversity and creativity in music performance and education. In 2006, he was awarded the university’s Bryden Alumni Award, which celebrate outstanding York University alumni who have achieved the extraordinary and made remarkable contributions to their field.

On Friday, December 13, Andrew Craig will perform a “Holiday Soul Pop-Up Show” in the Beaches. The performance is in addition to the main Holiday Soul Show, a solo concert that takes place in Guelph on December 6. Both evenings combine new, original songs of the season with tried-and-true seasonal classics arranged and “re-imagined” by Andrew.

Holiday Soul is the successor of “A Gospel Christmas Celebration”, which Andrew initially created, Musical Directed and co-produced for CBC Radio and Television. The television version received both a Gemini nomination, and a Bronze World Medal at the New York Festivals. The show then ran for 10 successful years in Toronto and then in Guelph.

These days, he teaches, works and makes content for online music and videos, and at the top of his list, directs his talent and passion to Culchahworks, an Arts Collective founded in 2013.

Culchahworks (Culchah derives its name from the Jamaican pronunciation for culture) honours, celebrates and preserves the history of important figures and events from Toronto’s black heritage. Andrew explains it as “telling stories, some known and others, newly told, which are from our black history and help to define Canada.”

This February, Culchahworks will premiere the play Fish And Rum. This work explores the story of illicit trade between the islands of Newfoundland and Jamaica during the Prohibition Era bringing together, again, two Canadian cultures through story-telling.

Andrew Craig is definitely a Torontonian to keep watching – and listening to!

To find out more information about the Beaches concert, please visit andrewcraig.me