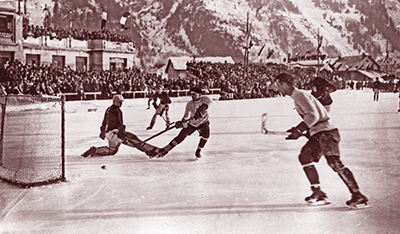 The Canadian national ice hockey team is overseen by Hockey Canada, a member of the International Ice Hockey Federation (IIHF). From 1920 to 1963, Canada’s team was made up of amateur club teams (usually the most recent Allan Cup champions). In 1963 the national men’s team was founded by Father David Bauer as part of the Canadian Amateur Hockey Association. This new national team first competed at the 1964 Winter Olympics.

The nickname “Team Canada” was christened at the 1972 Summit Series and has been frequently used to refer to the Canadian national team ever since.

Before the emergence of the Soviet Union (Russia), Canada dominated hockey, winning six out of seven golds at the Olympics before 1956 and 13 World Championship gold medals before 1961.

From 1954 to 1991, Canada was able to win only four World Championships and no Winter Olympic Gold medals when the Soviet, Czechoslovak, and Swedish teams dominated. This was in part because Canada’s best players were professionals and unable to attend these events.

In 1983, Hockey Canada began the “Program of Excellence” to prepare a team for the Winter Olympics every four years. This new National Team played a full season together against both national and club teams. In 1986, the International Olympic Committee voted to allow professional athletes to compete in Olympic Games, starting in 1988.

Canada captured its first Olympic gold medal in 50 years at the 2002 Olympics and struck gold again in 2010 in Vancouver.

Hockey Canada has retired two jersey numbers to mark the highest level of international excellence and respect; Mario Lemieux’s #66 and the great one Wayne Gretzky’s #99.
In recent years, Canada’s women’s hockey team has dominated the international stage, alongside their US rivals.

Let’s all cheer on Canada’s hockey teams this winter in Soshi as they both defend their Olympic gold metals.