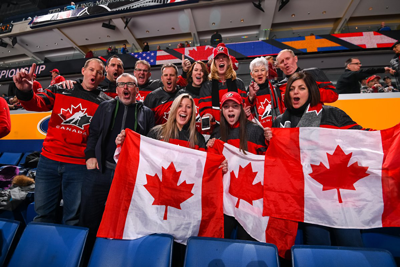 Some are predicting that Canada will win as many as 33 medals. Golds are projected to come from men’s hockey, both the men’s and women’s curling teams, moguls star Mikaël Kingsbury, who won silver in 2014, and snowboarder Max Parrot in the new Olympic freestyle event of “big air”.

Sports where medals are predicted include:

Here are some athletes to watch. Some names you’ll recognize from the last winter games, others are new faces. You can send messages and good wishes by visiting the Canadian Olympic website: olympic.ca

Brady Leman – The ski-cross star just missed the podium at the Sochi Games, settling for a fourth-place finish behind three French skiers.

Marie-Philip Poulin – The captain of Canada’s women’s hockey team has demonstrated her ability for scoring goals in gold-medal games. Watch her and her team again this year.

Kaillie Humphries – Humphries hopes to make three Olympic bobsleigh golds in a row. The 32-year-old from Calgary finished second at both the world championships and in the overall World Cup standings.

Charles Hamelin – This is the fourth Olympic Games for the three-time gold medallist. He’s so fast –  watch closely or you’ll miss him!

Ivanie Blondin – She’ll be competing in one of the new Olympic events: the “one track mass start speed skating” event. The 27-year-old Ottawa native won mass start gold at the 2016 World Championships and earned silver the year before.

Max Parrot – The 23-year-old from Bromont, Que., was the first snowboarder to land a quad underflip in competition. He’s a natural to compete in the new big air event.

Mark McMorris – The seven-time X Games gold medallist in big air and slopestyle was involved in a near-fatal crash while backcountry snowboarding in March. He expects to be ready for the inaugural big air event at the Games.

Tessa Virtue & Scott Moir – Canada’s top ice dance duo is back for another Olympic gold. Winners at the 2010 Games in Vancouver, Virtue and Moir also earned silver medals in both the ice dance and team events in Sochi. The pair from London (Virtue) and Ilderton, Ont., (Moir) is coming off its strongest season in years, going undefeated en route to a third World Championship.

Tessa & Scott are Canada’s flag-bearers for the Opening Ceremony!