Costume Trends – What Do You Want To Be? 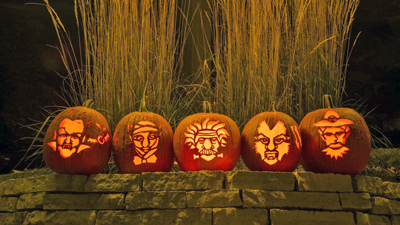 Halloween costumes have evolved throughout the decades, yet the inspiration for costumes remain consistent – have fun and dress to get a great reaction from others.

Costumes typically reflect the culture and interests of the era. In Victorian times, for example, costumes for women and girls included Southern Belle dresses, English nanny outfits and dazzling petticoats. Men and boys would dress up as literary figures, such as a Dickens gentleman, or one of Jules Verne’s science fiction characters.

After World War II, Halloween costumes became influenced by celebrities, television shows, and movies. Halloween costume manufacturing also became a booming business. Now instead of making a costume, you could buy one of a popular TV show character like Superman, Davy Crockett or Zorro. When “I Love Lucy” became a popular sitcom, fans of the show loved dressing up like Lucille Ball. Cowboy attire and superhero masks were also a favourite of the times.

With the invention of rubber masks, Halloween trick or treaters started wearing faces of characters from franchises like Peanuts, Star Wars, and Planet of the Apes. Of course, dressing up like your favourite Beatle was always a hit, especially if you could get 3 of your friends to dress up like the other members of the band!

During the 1990s, The Teenage Mutant Ninja Turtles made a huge splash. One of the most popular – and terrifying – Halloween costumes ever got its debut at this time when Scream hit theaters and sent a new scare-fare trend surging.

The early 2000s returned to costume experiences of old, when dressing up heavily revolved around children’s culture figures like The Wiggles and Bratz, or popular games such as the Rubik’s cube.

Today, popular costumes ideas continue to come from TV, movies and politics. There’s also a trend toward “meme costumes”, for example, dressing up like Fake News or Identity Theft.

Look for this year’s popular choices!