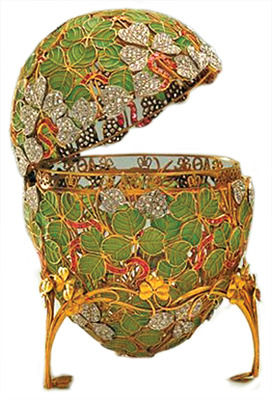 Faberge Egg
The most famous decorated Easter eggs are those designed by Peter Carl Faberge. In 1885 the Russian Tsar commissioned Faberge to make a special Easter gift for his wife. This first Faberge egg was an egg within an egg. The outside egg was of gold and enameled white with a smaller gold egg inside. Inside the smaller egg was a golden chicken and a jewelled replica of the Imperial crown. 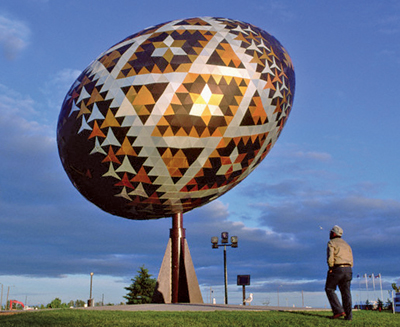 The world’s largest known Easter Egg is found in Canada! Vegreville, Alberta, a town of 5,300, is home to this 31 foot high sculptural egg, decorated in traditional Ukrainian style. The exquisite and intricate decoration of Easter eggs is a Ukrainian folk art known the world over.  Pysanka is the Ukrainian word for Easter egg.

The sculpture was built in 1975 to commemorate the centennial of the formation of the Royal Canadian Mounted Police in Alberta. Queen Elizabeth and Prince Phillip unveiled the plaque next to the egg during their visit in 1978.

Vegreville’s Pysankas is made of  aluminum, permanently anodized in gold, bronze, and silver. The 13,357 pieces weighs 16 tonnes and measures 25.7 feet long and 18.3 feet wide. 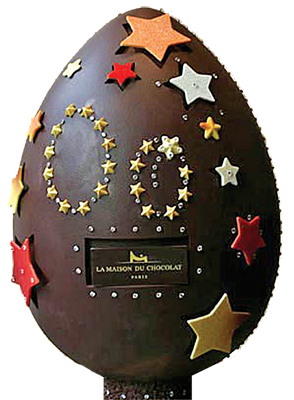 Diamond Stella Egg
One of the most expensive chocolate eggs was the unique Diamond Stella Egg made in 2006.  Standing 65cm tall, the egg was made of layers of dark chocolate and is stuffed with peach and apricot chocolates and pralines in the shape of fish – a French tradition at Easter. The outside was studded with rows of 100 half-carat diamonds.  It took La Maison Du Chocolat three weeks to make the egg.

This is the only Diamond Stella Egg produced, and was selling for £50,000 in their London store.