Easter Celebrations Around the World 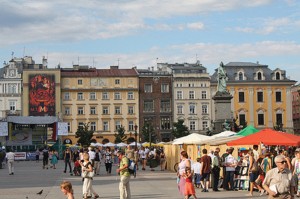 Easter traces itself to both Christian and non-Christian roots. Although Easter is one of the most important celebrations for Christians, it also comes at a time in the year where cultures around the world have traditionally celebrated the new life/new birth of springtime.

Easter in Eastern Europe and East Central Europe is an enormously important holiday whether those celebrating are Orthodox or Catholic. Easter is celebrated at different times, based on either the Gregorian calendar, which is followed by the West, or the Julian calendar, which is adhered to by Orthodox believers. Typically, Orthodox Easter falls later than Catholic Easter, though on some years Easter is celebrated on the same day by both East and West.

For Christians, Easter comes after 40 days of Lent. Traditions include attending church, gathering with family and enjoying a meal together. Boiled eggs are traditionally served at breakfast along with hot crossed buns. Some also enjoy Simnel cake, a fruitcake with a layer of marzipan (sugar/almond paste) on top and decorated with 11 marzipan balls.

The majority of Russians consider themselves to be Orthodox whether or not they actively participate in the Church. They celebrate Easter according to the Eastern calendar. Easter games, a special church service, and family activities are a part of Russian Easter observances.

Easter in Poland is celebrated according to the Western calendar because Poland is predominantly a Catholic nation. Easter celebrations in Krakow are especially popular, and the Easter market there draws large crowds.

Here are some Easter traditions that may surprise you!