FIFA World Cup 2010 – The biggest sporting event in the world – get a kick out of it! 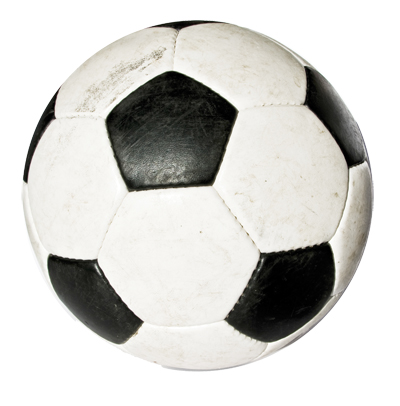 The world’s biggest soccer event, the 2010 FIFA World Cup South Africa – happens this June and July. The World Cup draws the world together like no other tournament can.
Even though Canada’s soccer team did not qualify for World Cup in 2010, there is still a lot of anticipation for the tournament. Canada is a nation of many nations, with Toronto being its most diverse and inclusive city. There are many cultural neighbourhoods throughout Toronto: Little Italy, Greek Town, Chinatown and Portugal Village to name a few. No matter which neighbourhood you visit, people are welcoming and friendly to all cultures.

It’s in these little pockets where World Cup fever is at its highest. If you are cheering for a particular team, why just watch it at home when your can live the event at a local pub or bar in one of Toronto’s cultural neighbourhoods. A Canadian team may not be playing in the World Cup this summer, but Canada is made up of people of many nations who will be participating in the tournament. Enjoy the games and cheer on all our countries!

The Ultimate Prize
The original trophy for the World Cup was the Jules Rimet Trophy, originally called “Victory”. It was officially renamed in 1946 to honour the FIFA President Jules Rimet who in 1929 passed a vote to initiate the competition. Made of solid gold on a blue base of lapis lazuli, the 14 inch high, 8.4 pound prize was an octagonal cup, supported by a winged figure representing Nike, the ancient Greek goddess of victory. The first team to be awarded the trophy was Uruguay, the winners of the 1930 World Cup.

A replacement trophy was commission-ed by FIFA for the 1974 World Cup. Today’s trophy stands 14.4 inches tall and is made of 18 carat solid gold. The 13.6 pound prize, depicts two human figures holding up the Earth.  It was first presented at the 1974 FIFA World Cup, to West Germany.

The name of the country whose national team wins each tournament is engraved on the bottom of the trophy, therefore it is not visible when the trophy is standing upright. The winners of the tournament receive a replica which is gold plated rather than solid gold.

A troubled past…
The Victory trophy had an interesting history. During World War II, the trophy was held by Italy (1938 champions). Ottorino Barassi, the Italian vice-president of FIFA and
president of FIGC, secretly took the trophy from a bank in Rome and hid it in a shoe-box under his bed. The trophy was stolen four months prior to the 1966 FIFA World Cup in England. A dog named Pickles was a hero when he found it wrapped in newspaper under a garden hedge in South London seven days later.

The final tournament for “Victory” was in 1970, won by Brazil. This allowed them to keep the trophy forever. However, the cup was stolen again from a display at the Brazilian Football Confederation headquarters in Rio de Janeiro. This time the trophy was never recovered. A replica was made and presented to the Brazilian president in 1984.

The 2010 World Cup will be staged at 10 venues across nine South African cities. Johannesburg will host the opening game on June 11 between South Africa and Mexico.
The World Cup final is on July 11. For the official World Cup schedule, visit: fifa.com/worldcup

Match up the 32 countries with the map. 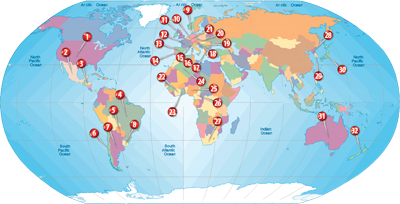