Bring Back the Meaningful Tradition of GIFT GIVING 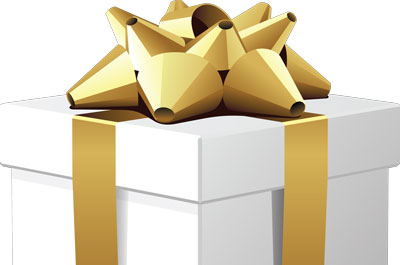 A gift should say: Surprise – Excitement – Caring – Thoughtfulness – Memorable – Gratitude – Love… it does not need to say Expensive

We’ll never forget the surprise on our son’s face when he saw a hamster under the tree, all packaged with a bow on the cage. One New Years, a daughter of a friend surprised her parents with a “day away” vacation (she was working and could afford to book a hotel). Another friend tracked down a real vintage top hat for her husband.

Think extra hard this year. Is there a special gift you can get someone, something that is not on their list and not expected but you know they’ll love. It doesn’t have to cost a lot of money. In fact, the best surprises are usually quite modest. But they should show that you’ve really thought about what would bring true delight into another person’s life.

Sometimes it just means listening carefully to what they talk about, what really catches their interest.

History of Gift Giving
Since the dawn of time, people have been giving gifts to each other. Giving gifts is a form of expressing one’s love, respect, and affection to another. In the Northern hemisphere, gifts were given when the sun returned during the Winter Solstice (Dec. 21). People made gift baskets from wheat stalks that were considered to represent fertility.

It was the Victorians in England who restored the traditions of giving gifts as part of Christmas celebrations. The gifts exchanged then were more tradition and simpler. They were scattered through the house and hidden in places like stockings.

At the same time newspapers began to advertise items for Christmas presents. Entrepreneurs started to sell holiday trinkets and gifts in the streets, carts and stalls.

Today, the gift giving tradition continues.
The next time you give a gift, what will it say?
Happy Gift Giving