Halloween: Night of the Roaming Dead 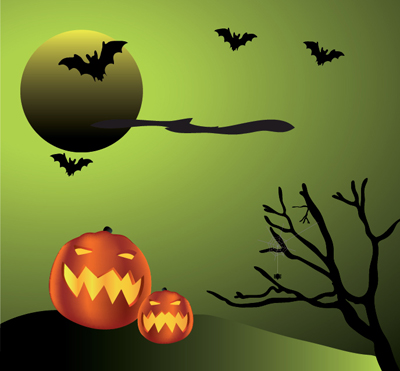 “All Hallows Eve” began as an ancient Celtic festival in Great Britain and Ireland when dead souls roamed the earth before All Hallows Day. Gifts and treats were left out to pacify those dead who weren’t so friendly! When Christianity came to the British Isles, All Hallows Day was changed to All Saints Day (“Hallows” means saints), celebrating church martyrs and saints on November 1st. All Hallows Eve eventually became known as “Hallowe’en”.

Halloween was brought to North America by thousands of Irish and Scottish immigrants. Although mostly a North American tradition, it has spread in popularity to most corners of the English speaking Western world, and increasingly into Western Europe. Jack-O-Lanterns and dressing in costume to go trick or treating are North America traditions that have since been exported back to Europe.

Some Halloween traditions such as bobbing for apples go back centuries to original Celtic divination traditions where young people would bob for apples to see who’d be the next to marry. The ancient Celtic festival included carving out a turnip and lighting the inside with a glowing ember to make a “lantern”. Pumpkins replaced turnips because they were easier to carry!

Did you know? “Halloween” is from  “All Hallow Eve”