Harvest Celebrated Around the World 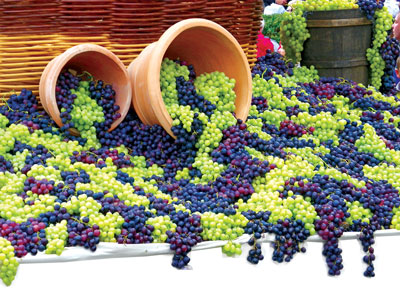 Thanksgiving as we know it is predominantly a North American celebration. In Canada, it is celebrated at harvest time and in the United States, it combines a traditional harvest with a historic event.

There have been harvest festivals since the Egyptians and hundreds of festivals are celebrated around the world each year. They occur at harvest time – which varies according to the location and the particular crops grown. Barbados, for example, celebrates the sugar cane harvest in the last few weeks of June and early July.

In the Northern hemisphere harvest festivals typically take place at the time of the harvest moon – full moon which occurs closest to the Autumn equinox usually around September 23, but sometimes in October.

Here are some Harvest Festival names and dates:

In the west, fruit and vegetables have been associated with harvest festivals, such as pumpkins, potatoes, corn and apples; in the East, feasts include exotic plants, for example, in Taiwan, pomelos or grapefruit; in Korea, taro soup and mushrooms. Because of the “moon” relevance, moon cakes are a favourite in Asia. Made with red bean paste, the round shape represents family unity and harmony.

Vietnamese Harvest Festival – According to folklore, parents worked so hard to prepare for the harvest that they left the children playing by themselves. The mid-autumn festival was created as a celebration, but in particular, to make up for lost time and show love and appreciation for children.

Tuscany Harvest Festival – Impruneta (Festa dell’Uva)
is considered the last chance before winter to indulge in special foods and wines. Families gather for outdoor dinner, with chicken, pigeons and suckling pigs roasted on spits, hams and loaves of bread. September is also the month of grape picking, so this is considered one of the merriest and most joyful times!

Southern Indian Harvest Festival – The festival is called Onam. Farmers show thanks to their cattle by decorating them with flowers and paint and allowing them to roam the streets. Families clean their homes and children go out to pick flowers and in return are bought new clothes. People go to the temple and give thanks.

Alaskan Harvest Festivals – After the end of salmon fishing and berry harvest, Alaskans have traditionally held a series of festivals and spiritual ceremonies throughout the winter months.

A Time to Give Thanks

Regardless of what tradition, harvest time is an occasion to pause and give thanks for the food, friends and family. It is also a time to remember, land produces the food that nourishes us and keeps us healthy.