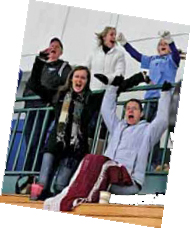 I never thought I’d be one of those hockey moms, you know, yelling cheers from the sidelines and racing off to sit in a frigid arena several times a week. But suddenly I realized that it had happened. Without intending to join the growing group of parents that follow their sons and daughters as they take to the ice and play Canada’s favourite sport, there I was – number one hockey mom.

You know you’re a hockey mom when: