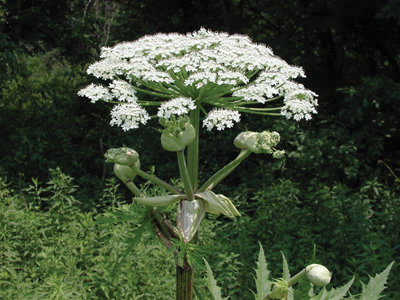 Since early July there has been an increasing concern about the harmful plant, Giant Hogweed. A score of plants have been found in the city, such as along the Don River and on crown lands. With children off school and increased outdoor activities, it is important to be able to identify and avoid being in contact with this poisonous plant.

What’s the danger?
This toxic plant can cause severe burns, blistering and painful sores when the skin is exposed to sunlight. Also, if its sap comes in contact with the eyes, it could lead to temporary or permanent blindness.

What to look for
Giant hogweed is exactly that, giant. Its hairy purple stem can reach heights of eight to fourteen feet. While its broad, pointed leaves can be five feet across. See photos below for examples.

Where its found
Hogweed may be found in rich, moist soils along roadside ditches, stream banks, waste ground, along tree lines and open wooded areas. The plant has also developed a reputation for spreading rapidly. One Toronto resident commented that the plant that was once only visible in his backyard is now beneath his fire escape!

What should you do?
Remain calm and report any sightings to the City of Toronto by calling 311. Additionally, if you have come in contact with hogweed, use cool, soapy water to wash any exposed skin surface. If you receive a burn, seek medical attention immediately.

Hogweed vs. Cow Parsnip
Cow parsnip is a toxic plant that looks like a smaller hogweed. Similar in appearance, it does causes a less severe reaction than hogweed. 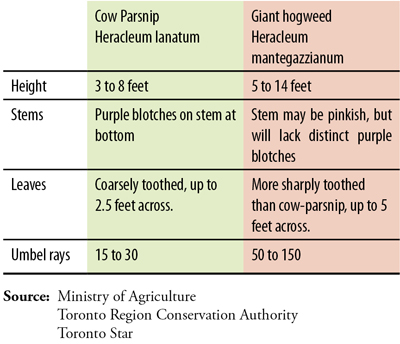