Thank you for your stories of what you did this past summer. It truly sounded like everyone had an awesome time. We have chosen two winners and one honourable mention. Read their entire stories at beachesliving.ca/summerstories.

Winners, Maša and Mina, will each receive a $25 gift card to Staples, and Stella will receive two movie passes to Alliance Cinema in the Beach.
We hope you enjoy their stories. 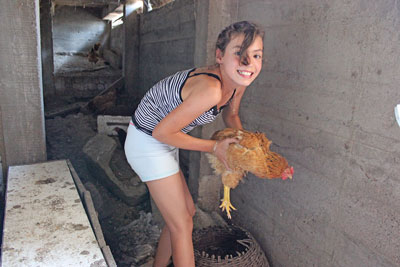 My summer was absolutely FANTABULOUS! I went to so many countries and did so many things that 350 can’t possibly explain how truly amazing my summer was.

I went to Rome, an island in Croatia called Hvar, and I went to my background country, Serbia. There, I went to Belgrade, a farm called Goric where my grandmother lives, and a farm named Brancic where my aunt’s family lives.

Rome was AMAZING! I saw so many things, like the Emanuel castle, Coliseum, Spanish Steps, Vatican City, and so, so, SO much more. My favorite was the Emanuel castle. It’s GORGEOUS! In the evenings, we’d go on long walks through Rome. And I couldn’t possibly forget about the delicious Italian food!!!

After Rome, we went to a gorgeous island in Croatia. My Grandmother has an apartment. This island is Hvar. I found crabs, sea urchins, and I even found a starfish! It was a sunny, but not too hot.

After, we went to my grandmother’s used-to-be farm in Serbia. It’s not really a farm anymore, because there’s no more pigs, sheep, or chickens. Though there is a garden, a cat and a dog. I really enjoyed playing with the cat and dog. They get along well. I have a bow, arrows and a target there so I mainly practiced archery. I also made a fort out of wood. It was a lot of fun!

Then, I was invited to go to my aunt’s family. Without my sister! (Hallelujah!) They live on the funnest farm EVER! I’d go egg-hunting, and when I found a chicken on an egg, I’d pick up the chicken and throw it. AWESOME! I’d play with the adorable little chicks, and feed them. I really loved petting the calf that was only two days old! Plus, I was privileged by naming all the cows! I couldn’t really play with the pigs, for they are really violent. Plus now, I’m a third aunt to a baby girl, also named Mina! She’s adorable!

Then, I went to Belgrade. My aunt, uncle, and cousin live there.  During the day, we’d usually go to my cousin’s. We also went to the museum of Nikola Tesla. I enjoyed walking down Knez Mihilova street.

I can’t write any more than this, but any ways, my summer was absolutely AWESOME! 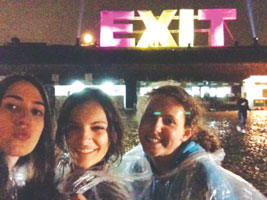 Summer 2014 was one of the most filled summers I have ever had. As I’m typing this now, only half of it has gone by, yet I still have so much to write. Instead of unsuccessfully trying to summarize my whole summer, I am going to tell you, dear reader, about the fun I had during the Exit Festival in Serbia.

During the beginning of July, I had visited Rome, Italy’s capital, and Hvar, a little beach town located on an island of the same name off the coast of Croatia. In Rome, I visited the ruins of the ancient civilization and other tourist attractions and in Hvar, I swam in the Adriatic Sea. When I arrived in Valjevo, a small town in Serbia, I expected to spend the next week reading and watching Netflix. But to my surprise, I was invited to visit my Aunt and cousin in Novi Sad, who I hadn’t seen for quite a number of years.

Upon my arrival, I was greeted with hugs and kisses and a wristband for the Exit Festival in the Petrovaradin Fortress. I was ridiculously excited for the festival because I had been wanting to go to Exit ever since the airplane landed at Belgrade’s Airport. So here I was, in Serbia’s second largest city, about to go to Europe’s best music festival. But only one thing stood in my way: rain.

Although I am a competitive swimmer, I absolutely hate getting my hair wet. So for protection from the rain, my cousin, her friend and I piled clothes on top of us to keep us from getting wet. Thankfully, the rain lasted only for a few hours, but it left the fortress grounds covered in mud. We slipped and slid from stage to stage and had a great time, returning home at 4:30 in the morning every day. The only downside was the mud. And my cousin fell a few times, pulling the rest of us down with her. We were so dirty from the mud, that I’m still finding chunks of mud in my hair. And of course, the brown mud stains in my shoes and clothes will make sure that I don’t forget about Stromae, Skrillex, Gloria Gaynor and all the other singers, bands and DJs that performed at Exit.

Sadly, Exit had to come to an end. As we Exited Novi Sad and left for Valjevo, we all looked back at the Petrovaradin Fortress. But the rest of summer would be fun too. My cousin’s was just beginning and I was off to explore the rest of Serbia. I hope I get to to Exit again next year! 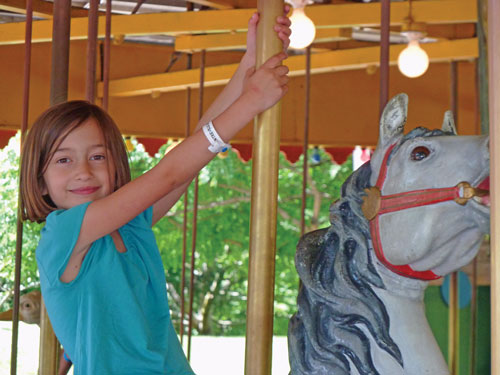 This summer I went to Canada’s Wonderland and Centreville. I also went to the cottage and went over the Big Chute Marine Railway in a boat on the Trent Severn Waterway. I celebrated my 9th birthday party at the Rock Oasis – Indoor Climbing gym with my friends. I tried waterskiing for the first time and hung out with my cousins at a euchre tournament.

I went to the Tea Lake Regatta with my family and won two 1st place medals. I went to two awesome camps. The first was a bike camp and the other an arts camp. I also saw Guardians of The Galaxy twice! My summer has totally ROCKED so far and has been super fun.