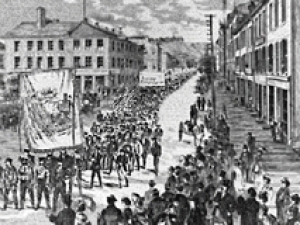 Labour Day is more than just a long weekend, it is an annual holiday to celebrate the economic and social achievements of workers. While we celebrate it on  the first Monday in September, other countries celebrate  it as International Workers’ Day on May 1.

Canada’s Labour Day began in Toronto when the Toronto Printers Union went on strike in 1872 after demands for a shorter work week were ignored. 1500 workers marched in the street (see photo). Unions weren’t allowed back then and George Brown (later we called a college after him!) was editor of the Toronto Globe and launched legal action against the striking workers.

Our prime minister at the time, Sir John A. Macdonald, stepped in and promised to repeal what he called the “barbarous” anti-union laws. A few months later, The Trade Union Act was passed by Parliament, legalizing unions. In the years following, various parades were organized in honour of the Toronto demonstration and what was called the “nine-hour movement” with the “nine-hour pioneers”.

In 1894, Labour Day was made a national holiday by an act of Parliament.