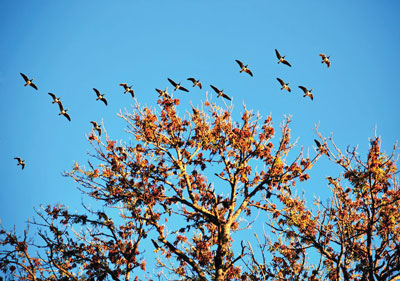 October and November are the busiest months to watch the fall migration of birds to warmer climates. Various species know – by instinct – when it’s time to leave in order to reach their destination on time.

Toronto is a particularly “bird friendly” area both as a home and a crucial stopover because of its over 10 million trees and ample fresh water.

You’ll see birds migrating through the fall but for enthusiasts, there are specific places where bird watchers know what species will be flying overhead—and when!

The Toronto Waterfront is an important stop-over spot for migrating birds with well over 150 species seen regularly – a foremost site for bird-viewing enthusiasts.

Watching the Raptors — Birds, That Is

Raptors, or birds of prey include Bald Eagles, Hawks, Vultures and Falcons. These magnificent and very large birds travel right over Toronto—sometimes in flocks of several hundred. They will not fly over the Great Lakes—they wait until the wind is right so they can be carried. A noted viewing area for Raptor enthusiasts is Rosetta McClain Gardens, on top of the bluffs off of Kingston Road near Birchmount Road. Because of the height of the cliffs, hawks have been known to pass by almost at eye level.

Birds from across Ontario also tend to funnel along the shores of Lake Erie and Lake Ontario as they travel south into the USA. This is because they can take advantage of the strong winds over these two Great Lakes to assist in their long flight.

There are 5 or 6 known bird “flyways” for migratory birds in North America. These are ancient routes that birds have used for centuries. Because of Toronto’s funnel effect, the city’s been described as a kind of  “bird superhighway” because it lies at the confluence of two of these flyways: the Atlantic Flyway and Mississippi. It means that through the Fall, 270 bird species travelling through Toronto head south to the Gulf of Mexico, the Atlantic coast, and South America!

For a complete listing of the fall migration in Ontario, visit the Ontario Nature’s website, ontarionature.org.