Nothing Beats Hockey Morning in the Beaches 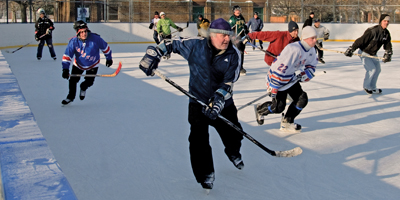 On a crisp -15°C morning at Kew Gardens, the familiar sounds of pick-up hockey echo through the park from the rink next to the lake. It is the swish of skates on the ice, the popping of pucks hitting on sticks, and the laughter and cheering from energized players.
A friendly hockey game has been happening at Key Gardens for as long as anyone can remember. Some players, like Brian Williams, have been playing here for over 40 years, other players come and go, and some find their way back into the fold. Some carry through generations, who have passed this legacy on from one era to the next.

The players range in age from 18 to 60+ and skill levels vary from a Toronto Marlies’ alumnus to absolute beginners.

“It’s just a great group of guys from all walks of life,” says Toronto architect Ian Grinnell, 63, who has been playing Kew Garden shinny for nearly thirty years. “We play hard without referees, it’s self-policing. That’s the reason why these guys love each other.”

The game usually lasts over two hours without any break. Some players come out as much as five times a week.  On a popular day, there can be twenty a side. No one gets benched.
“I didn’t know anyone,” says a retired Toronto businessman. “I hadn’t played in thirty years, so I came down and met guys like Ian (Grinnell) and Brian (Williams) and they helped me along. I never played organized hockey. I just started. It’s really been fun — great exercise. It’s amazing!

There’s no body checking, no high sticking, and no fighting. Some choose to wear helmets; some feel quite comfortable in toques covering their long, flowing grey hair.

“This is what I live for!” says Grinnell laughing. “My kids know that wherever they find me dead, they better get my skates on so they can say that I died with my skates on!”